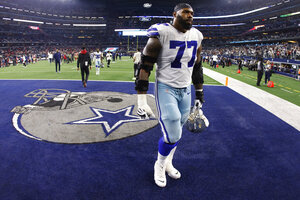 FILE - Dallas Cowboys offensive tackle Tyron Smith (77) leaves the field following an NFL wild-card playoff football game against the San Francisco 49ers in Arlington, Texas, Sunday, Jan. 16, 2022. Smith is expected to return at some point during the 2022-23 season after sustaining a torn left hamstring that also injured that knee. Owner and general manager Jerry Jones said Thursday, Aug. 25, 2022, that he wasn't sure if Smith's injury would require surgery, but that the eight-time Pro Bowler should return late in the season. (AP Photo/Ron Jenkins, File)

Jones said during an appearance on ESPN that he wasn’t sure if Smith’s injury would require surgery but that the eight-time Pro Bowler would return late in the season.

A person with knowledge of the injury, which happened in practice Wednesday night, said Smith had a torn hamstring with a knee fracture that resulted from the tendon pulling away from the bone. ESPN first reported the injury.

Speaking to The Associated Press on condition of anonymity because there was no official announcement of the injury, the person said it appeared Smith would be sidelined until December.

Smith was injured during 11-on-11 drills when he went to engage linebacker Leighton Vander Esch about 5 yards downfield before crumpling to the turf. He walked off the field without help and later walked past reporters outside the locker room.

The 31-year-old Smith has been hampered mostly by back, neck and ankle injuries in recent years. Smith has missed at least three games each season since 2016. He played just two games in 2020 before season-ending neck surgery.

Rookie first-round pick Tyler Smith could replace him. Tyler Smith has been working at left guard but was the starting left tackle at Tulsa. He missed both practices this week with an ankle injury.

“We’ve played a lot of games without Tyron,” Jones said on ESPN. “Not as successfully as we do with him. But in the meantime we’ve got a guy named Tyler Smith who’s come on the scene.”

The injury is a major blow to an offensive line that was already in transition.

The Cowboys were counting on Smith and five-time All-Pro right guard Zack Martin as the anchors for a unit that is young and relatively inexperienced at the other three spots. Dallas probably just added a fourth spot to that concern.

Josh Ball, a fourth-round pick last year, has replaced Tyron Smith at times during training camp this year. Ball missed all of his rookie season with an ankle injury.

If Tyler Smith moves to left tackle, third-year player Connor McGovern is the likely choice at left guard. Before Tyron Smith’s injury, McGovern, who missed all of his rookie year with a torn pectoral muscle, was expected to start ahead of Tyler Smith. Tyler Biadasz, another third-year player, is the center.

Without Tyron Smith, quarterback Dak Prescott is missing the veteran blocker on his blind side and two other starters from last year’s line while moving on without top receiver Amari Cooper, who was traded to Cleveland in a cost-cutting move in the offseason. CeeDee Lamb is taking over the No. 1 receiving role from Cooper.

The defending NFC East champs, who lost a wild-card game at home to San Francisco in January, open the season with two tough home games. The opener is against Tom Brady and the Tampa Bay Buccaneers on Sept. 11 before Joe Burrow and the AFC champion Cincinnati Bengals visit.

“I like where we are relative to our skill positions and frankly, our challenge is in our offensive line,” Jones said. “The offensive talent has got to step up with the recognition that we can’t count on what you might have had up there.”