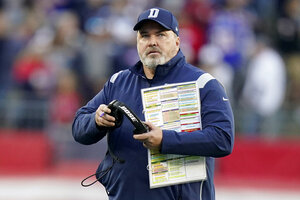 Dallas Cowboys head coach Mike McCarthy looks at the scoreboard during the first half of an NFL football game against the New England Patriots, Sunday, Oct. 17, 2021, in Foxborough, Mass. (AP Photo/Steven Senne)

At a news conference prior to the start of training camp, Jones said McCarthy was brought back for a third season leading the team because he offered the best chance for the Cowboys to win a Super Bowl.

Despite leading Dallas to a 12-5 record and the NFC East title last season, there were questions about McCarthy’s job security after losing 23-17 to the San Francisco 49ers in a wild-card playoff game.