JetBlue is the latest airline to retreat from blocking seats 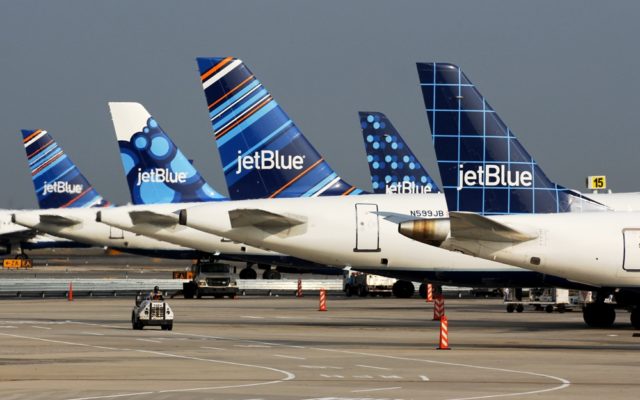 The days of airlines blocking seats to make passengers feel safer about flying during the pandemic are coming closer to an end.

JetBlue is the latest to indicate it is rethinking the issue. A spokesman for the carrier said Thursday that JetBlue will reduce the number of seats it blocks after Dec. 1 to accommodate families traveling together over the holidays.

Southwest Airlines said last week that it will stop limiting the number of seats it fills after Dec. 1. Delta Air Lines and Alaska Airlines say they will lift caps on seating early next year.

The pandemic and resulting border restrictions caused U.S. air travel to plunge 95% in April. Some airlines promised to block middle seats to create more distance between passengers. Others, notably United Airlines and American Airlines, did not, arguing that ventilation systems and air filters made planes safe without social distancing.

It is unclear whether airlines that blocked seats took passengers from other airlines. All the airlines have reported a slow rise in the number of passengers. Yet so few people are flying — in October, several months into the pandemic, U.S. air travel is still down 65% from a year ago — that anyone willing to get on a plane might feel it’s safe anyway.

JetBlue spokesman Derek Dombrowski said the airline will keep flights under 70% full through Dec. 1, and will keep some limits through the holidays, “but what that capacity cap will be has yet to be determined.”

Dombrowski said there will be more families and groups traveling over the holidays, so the New York-based airline will offer “a small number of rows” where people traveling together can occupy all the seats.

Earlier this week, JetBlue President Joanna Geraghty said blocking seats “is not something that’s sustainable,” and that as passenger numbers rise and studies show airplane cabins are safe, the airline will raise capacity on flights.

Southwest CEO Gary Kelly made a similar reference to “scientific evidence” that cabins are safe, but he also cited a strong financial incentive to stop blocking middle seats. Kelly said Southwest lost $20 million in revenue September because of the policy, with the loss seen rising to between $40 million and $60 million in November.

A recent study by the Defense Department’s transport command said the risk of spreading the virus that causes COVID-19 on planes is very low if everyone wears face masks. However, the study was not peer-reviewed and did not account for things like people moving around the cabin.

A number of reports suggest that transmission on airlines is rare, although the lack of testing and contract tracing make it impossible to quantify the risk of flying.

David Koenig can be reached at www.twitter.com/airlinewriter