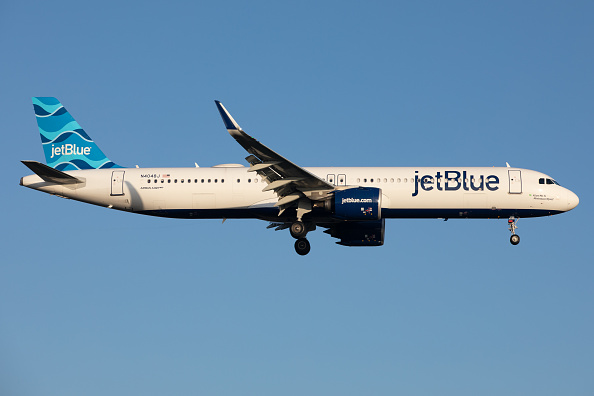 A JetBlue plane scheduled to depart from John F. Kennedy International Airport in New York on Wednesday morning bumped into an unoccupied aircraft en route to the runway, officials have confirmed.

The unoccupied plane, also owned by JetBlue, was parked at the time of the collision, which the airline company and Federal Aviation Administration say happened during pushback — when an aircraft is pushed back from its parked position, usually at the gate, before heading toward the tarmac to take off. The operating plane “struck the tail” of the parked one, then returned to the gate and transferred its passengers to a different aircraft, according to JetBlue and the FAA. No injuries were reported in connection with the accident.

“On Wednesday morning, JetBlue flight 1603 with scheduled service from New York’s John F. Kennedy International Airport (JFK) to San Juan’s Luis Muñoz Marin International Airport (SJU), came into light contact with a parked unoccupied aircraft during pushback,” JetBlue said in a statement. The company went on to note that safety is its “first priority” and “both aircraft involved will be taken out of service for inspection” while the incident is investigated.

The FAA said it will lead the probe into Wednesday’s collision in a separate statement sent to CBS News. The agency confirmed additional details about the accident as well, saying both JetBlue aircrafts involved are the same model, an Airbus 320.

Wednesday’s collision at JFK comes just a few days after a close call was reported at the same airport. On Friday, a Delta plane nearly collided with an American Airlines plane when the latter aircraft crossed a runway at JFK where the former craft was accelerating in preparation for takeoff. The Delta flight, a Boeing 737 carrying 145 passengers and six crew members and headed to the Dominican Republic, managed to stop about 1,000 feet from the American Airlines plane, a Boeing 777 carrying 137 passengers and 14 crew members to the U.K., CBS New York reported.

Federal authorities have also opened an investigation into Friday’s narrow escape, with officials at the National Transportation Safety Board leading the probe.  The NTSB confirmed its involvement in the investigation on Twitter.

“Any time you have a runway incursion like this, there’s a potential for very bad things to happen,” said Robert Sumwalt, former chair of the NTSB, told CBS New York. “The NTSB is going to be wanting to understand what happened, why did this happen. Was there a distraction in the cockpit of the American flight? Was there misunderstanding as to the air traffic control clearance?”