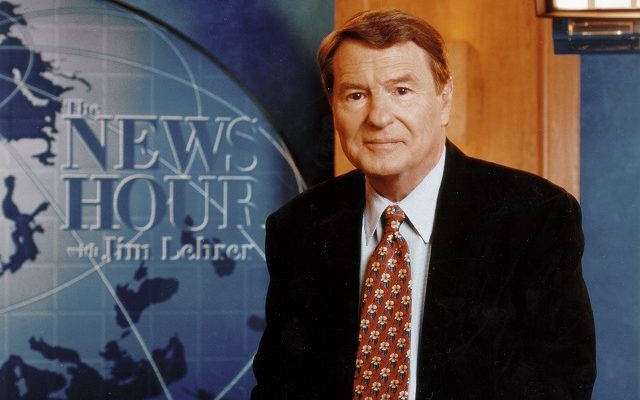 This undated image released by PBS shows Jim Lehrer of "The NewsHour with Jim Lehrer." PBS announced that Lehrer died Thursday, Jan. 23, 2020, at home. He was 85. (PBS via AP)

Former PBS NewsHour anchor Jim Lehrer, who co-founded the groundbreaking news show the “MacNeil/Lehrer Report” in 1975 and went on to moderate more presidential debates than anyone in history, has died, Judy Woodruff, the anchor and managing editor of the PBS NewsHour, said. He was 85.

“I’m heartbroken at the loss of someone who was central to my professional life, a mentor to me and someone whose friendship I’ve cherished for decades,” Woodruff said in a statement. “I’ve looked up to him as the standard for fair, probing and thoughtful journalism and I know countless others who feel the same way.”

Lehrer died Thursday in his sleep, PBS said in a release.

Over a career that spanned 50 years, Lehrer moderated a total of 12 presidential debates, more than anyone in history, including all the ones held in 1996 and 2000. He also wrote 20 novels, three memoirs and several plays and earned dozens of journalism awards and honorary degrees. Former President Clinton bestowed the National Humanities Medal on Lehrer in 1999. The American Academy of Arts and Sciences elected him a fellow and, alongside Robert MacNeil, Lehrer was inducted into the Television Hall of Fame in 1999.

Mr. Clinton honored Lehrer in a tweet on Thursday, writing “liked and admired Jim Lehrer. He believed news is a public good, not a commodity. And he was always completely on the level in reporting, interviewing, and moderating debates. His life was a gift that strengthened our democracy.”

CBS News’ John Dickerson posted on his blog on Thursday that “my every interaction with him over the years left me better for it.

“I have thought more than once about Jim Lehrer, if you could have his talent and be that calm, decent and good a person in your interactions with other people, you’d have really accomplished something,” Dickerson wrote. “Just the other night I was watching his interview with Bill Clinton after the Starr report came out. He was direct and clear, and you felt the salacious material was in good hands. He’d ask the questions that needed to be asked directly and without foolishness.”

Lehrer’s career began in Dallas. He covered John F. Kennedy’s assassination in 1963 for the Dallas Morning News and at the Dallas public radio station KERA.

After he and MacNeil covered the Watergate trial, the two were paired on the “MacNeil/Lehrer Report,” which began as a half-hour news program on PBS in 1975, and then in 1983, expanded to an hour. Lehrer reported from Washington and MacNeil from New York.

Guests included presidents, prime ministers, members of Congress and foreign leaders. From 1976 until his retirement in 2011, Lehrer interviewed nearly every presidential and vice-presidential nominee.

In 1988, Lehrer moderated his first debate with one of the two face-to-face matchups between former Vice President George H.W. Bush and Michael Dukakis. The 1988 race was so close that the debates became vitally important — and Dukakis told Lehrer in 2000 that he felt that the outcome of the election was “probably” affected by his performance at the debates.

In total, Lehrer moderated at least one debate in every presidential election until 2012. He compared moderating the debates as “walking down the blade of a knife.”

“The stakes are very high, no question about it,” he told PBS senior correspondent Jim Brown in 2011. “By the time these big televised debates come along, there are usually two, three, four weeks before the election itself, and 90% of the people have decided for whom they are going to vote, but the debates are where they solidify positions.

“They help the few that haven’t decided, and they help the few that are leaning one way or another, and they become extremely important to a candidate because there are very few runaway elections anymore in American politics. So, it gets very close toward the end at a debate, and one thing you can do in a debate, good or bad, can affect the outcome and everybody knows it.”

MacNeil retired in 1995, leaving Lehrer to launch the solo “NewsHour with Jim Lehrer.” He anchored until 2009, when he reduced his appearances to once or twice a week, before retiring in 2011.

He is survived by his wife, Kate, three daughters Jamie, Lucy, and Amanda; and six grandchildren.