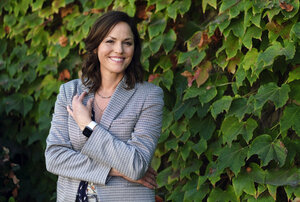 NEW YORK (AP) — Some familiar faces will join the investigation into gruesome murders when “ CSI: Vegas ” premieres Wednesday on CBS.

The original “CSI,” which aired its series finale in 2015 after 15 seasons, wowed viewers with the idea of using forensics to solve crimes. It created armchair experts out of people in their living rooms and coined the term “ the CSI effect.”

“CSI: Vegas” debuts 20 years to the day as its predecessor’s premiere.

“In 2000, we were pretty sure that science could tell us somebody committed a crime or not. Now we’re even more sure to the point where I would say, I don’t know how anybody gets away with anything at all,” Fox said. She hopes this series will once again draw people to the power of science — at a time when it’s been scoffed at by naysayers of climate change and vaccines.

“We have a really smart audience and they want a smart show, said Fox. “And yet we have a lot of people that believe in science less than ever. So it’s a really interesting time to do a show about science. It would be amazing… to make science really fun and exciting and dazzling and mysterious again.”

“CSI: Vegas” was originally conceived as a 20th anniversary special episode but those plans were scrapped and the writing evolved into an actual series. One central mystery will loom throughout, but each episode will also tackle a case of its own.

Fox says we’ll see “a lighter version of Sara Sidle than we’ve ever seen before,” which she enjoyed, because in the original version she dealt with burnout. This time, “she’s not carrying the Vegas weight of the world on her shoulders.”

A big reason why Fox said yes to playing Sidle again was because it would mean she would reteam with Petersen, as a happily married couple (in the past they were on and off and back on again.)

“My onscreen relationship with Billy Petersen, Sara and Grissom, is definitely the longest relationship of my life. To get to be in a couple that’s actually survived 21 years is very rare, and I think it’s a really cool thing,” she said.

She’s even thought of other ways to reteam with Petersen in the future. Fox says they could easily play something akin to the old guys in the balcony from “The Muppets.” She also adds “we could play a cool sibling thing, but I don’t know if anybody would want to see that.”