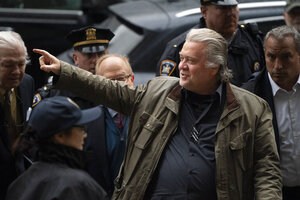 NEW YORK (AP) — Steve Bannon’s trial on charges he defrauded donors who gave money to build a wall on the U.S. southern border might not happen until late next year, a judge said Tuesday.

The New York case stems from much of the same alleged conduct as a federal case cut short last year by a Trump presidential pardon.

Prosecutors say that Bannon falsely promised donors that all money would go to constructing a wall at the U.S.-Mexico border.

Instead, prosecutors allege, Bannon was involved in transferring hundreds of thousands of dollars to third-party entities and used them to funnel payments to two other people involved in the scheme.

At a hearing Tuesday, Merchan set various deadlines for pretrial motions through next summer and gave Bannon’s lawyers until February to comb through evidence and file motions.

Prosecutors say so far they’ve turned over about four terabytes of material — the size equivalent of millions of written pages or hundreds of hours of video.

If Bannon’s trial happens in November 2023, it could coincide with the trial in the New York attorney general’s fraud lawsuit against Trump and his company.

Attorney General Letitia James’ office said in court papers last week that she intends to seek a trial date before the end of 2023.

Trump has been been laying groundwork for a potential comeback campaign for president in 2024.