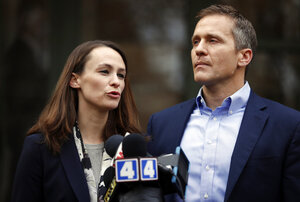 FILE - Missouri Governor-elect Eric Greitens and his wife Sheena speak to the media Tuesday, Dec. 6, 2016, in St. Louis. The judge in the child custody case involving the former Missouri governor ruled that it should move to Texas because his two sons now spend most of their time there, and to better protect the boys from public scrutiny, according to a court document obtained Thursday, Sept. 8, 2022, by The Associated Press. The ruling issued in August 2022 but sealed in Missouri also noted that contrary to allegations levied by Sheena Greitens, there was “no pattern of domestic violence by either Mother or Father.” (AP Photo/Jeff Roberson, File)

AUSTIN, Texas (AP) — The judge in the child custody case involving former Missouri Gov. Eric Greitens ruled that it should move to Texas because his two sons now spend most of their time there, and to better protect the boys from public scrutiny, according to a court document obtained Thursday by The Associated Press.

The ruling by Boone County, Missouri, Associate Circuit Judge Leslie Schneider, issued in August but not made public in Missouri, also noted that despite allegations of instances of violence levied by Sheena Greitens, there was “no pattern of domestic violence by either Mother or Father.”

Sheena Greitens’ attorney said she never alleged a “pattern” but rather specific instances of abuse.

Greitens, 48, resigned as governor in June 2018, less than a year-and-a-half into his first term, his ouster spurred by a sex scandal and allegations of campaign finance impropriety. He sought to stage a political comeback in a run for the U.S. Senate, but finished third in the Aug. 2 primary won by Missouri Attorney General Eric Schmitt. Ads from his opponents often focused on Sheena Greitens’ explosive allegations in a March affidavit, accusing her ex-husband of domestic abuse.

Eric and Sheena Greitens divorced in 2020 and she moved to Texas. She is a public affairs professor at the University of Texas in Austin.

At issue was whether custody oversight of the couple’s two sons should be in Missouri or Texas.

Schneider ruled late last month that the case should be moved to Texas. Sheena Greitens, who requested the move, asked that Texas seal records in the ongoing case. But the AP was able to obtain the court document from the Travis County Courthouse in Austin.

The judge pointed to concerns about media attention in Missouri expressed by the guardian ad litem appointed to represent the children’s interests. “She has confirmed that there are more options in Texas to protect the privacy of the parties and of the children,” the judgment says. It notes that in Missouri all court records are presumed to be open to the public and that the judge had received numerous requests for documents in the case.

Sheena Greitens’ sworn affidavit stated that during their marriage, Eric Greitens was physically abusive and demonstrated such “unstable and coercive behavior” that steps were taken to limit his access to firearms.

But Schneider wrote, “The Court finds by a preponderance of the evidence that there has been no pattern of domestic violence by either Mother or Father. The children have never been at risk or vulnerable at the hands of either parent.”

Sheena Greitens “never alleged a ‘pattern,’ which is a legal term of art,” her attorney, Helen Wade, said in a statement to AP. “Dr. Greitens related under oath specific instances over a span of time, which were amply documented with third parties at the time, and she stands by her sworn statements.”

Eric Greitens strongly denied the allegations and alleged that Sheena Greitens’ claims were part of a political attack engineered by those who wanted him to lose his race. Several GOP leaders publicly worried that if Greitens won the primary, he could lose to a Democrat in November, even in a largely-Republican state like Missouri.

Sheena Greitens denied any political motivation and said she worked with no one else in filing the affidavit.

This week, AP joined the Kansas City Star’s motion to obtain the Missouri case records, arguing the decision went too far and denies voters important information about a recent candidate for public office.

Eric Greitens, a former Navy SEAL officer and Rhodes scholar, was elected in November 2016. In January 2018, he confirmed a TV report about a 2015 extramarital affair with his St. Louis hairdresser. He was subsequently charged with felony invasion of privacy for allegedly taking a nude photo of the woman and using it to keep her quiet. That charge was dropped months later amid allegations that the chief investigator and local prosecutor mishandled the investigation.

Greitens claimed he was the victim of a political hit.

He faced a second charge accusing him of illegally using a donor list from a charity he founded to raise money for his campaign. That was dropped when he resigned in June 2018 after the Missouri House began an impeachment investigation.