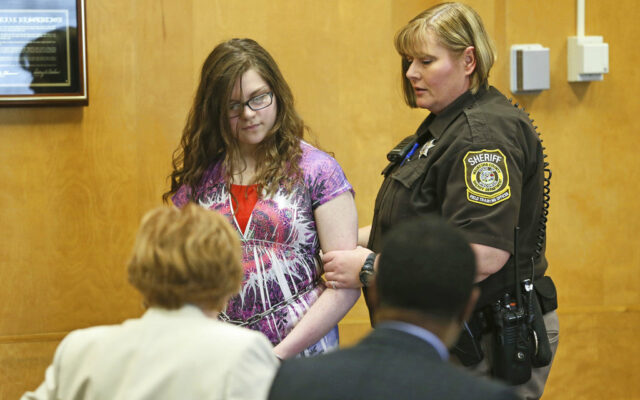 FILE- In a Monday, Feb. 20, 2017 file photo, Anissa Weier, 15, appears in court in Waukesha, Wis. Weier, one of two Wisconsin girls charged with repeatedly stabbing a classmate to impress the fictitious horror character Slender Man, pleaded guilty Monday, Aug. 21, 2017, to attempted second-degree homicide as a party to a crime, with use of a deadly weapon. She initially faced a charge of attempted first-degree intentional homicide in the 2014 attack on Payton Leutner in Waukesha, a city west of Milwaukee.(Michael Sears/Milwaukee Journal-Sentinel via AP, Pool, File)

MADISON, Wis. (AP) — A judge was set to review a release plan Friday for a woman who has spent almost four years in a mental health facility after she admitted to taking part in the 2014 stabbing of a Wisconsin classmate to please the fictional horror character Slender Man.

Waukesha County Judge Michael Bohren ruled in July that 19-year-old Anissa Weier no longer poses a threat and ordered state officials to draw up a conditional release plan for her.

Weier and her friend, Morgan Geyser, lured classmate Payton Leutner into the woods at a Waukesha park following a sleepover in May 2014. Geyser attacked Leutner, stabbing her multiple times as Weier cheered her on. All three girls were 12 years old at the time.

Weier and Geyser left Leutner for dead. A passing bicyclist found her. She suffered 19 stab wounds and barely survived.

Police caught up with Weier and Geyser hours after the attack as they were walking along an interstate. They told investigators they were on their way to the Slender Man’s mansion. They said they thought he was real and that attacking Leutner would make them his servants and keep him from killing their families.

The Slender Man character grew out of internet stories. He’s depicted as a spidery figure in a black suit with a blank white face. Sony Pictures released a movie about Slender Man stalking three girls in 2018. Weier’s father blasted the film as an attempt to capitalize on a tragedy.

Weier pleaded guilty to attempted second-degree intentional homicide. Borhen sentenced her to 25 years at the Winnebago Mental Health Institute in December 2017. She argued in a petition for conditional release that she has exhausted all her treatment options at the facility and needs to rejoin society, vowing she’d never let herself “become a weapon again.”

Geyser pleaded guilty to attempted first-degree intentional homicide. Bohren sentenced her to 40 years in a mental health facility in February 2018. She has argued that her case should have been heard in juvenile court, but an appellate court ruled last year the case was properly heard in adult court.