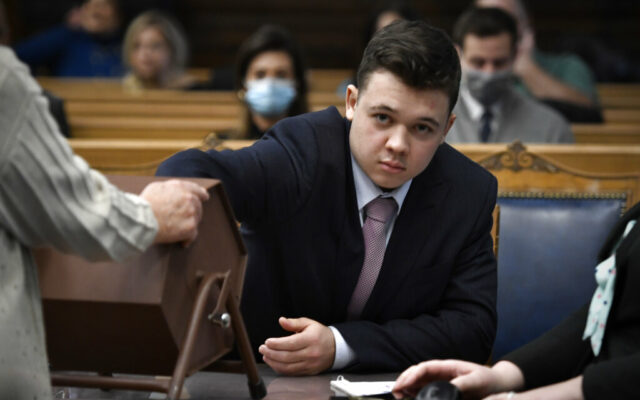 Kyle Rittenhouse pulls numbers of jurors out of a tumbler during his trial at the Kenosha County Courthouse in Kenosha, Wis., on Tuesday, Nov. 16, 2021. The jurors selected through this process will not participate in deliberations. (Sean Krajacic/The Kenosha News via AP, Pool)

KENOSHA, Wis. (AP) — The jury began deliberating Tuesday at the murder trial of Kyle Rittenhouse after listening to dueling portrayals of him as a “wannabe soldier” who went looking for the trouble, or a concerned citizen who came under attack while trying to protect property.

The case went to the anonymous, 12-member jury after Rittenhouse himself, in an unusual move, was allowed by Judge Bruce Schroeder to draw the numbered slips of paper from a raffle drum that determined which of the 18 people who sat in judgment during the trial would decide his fate and which ones would be dismissed as alternates.

That task is usually done by a courtroom clerk, not the defendant.

Rittenhouse, 18, faces life in prison if convicted as charged for using an AR-style semi-automatic rifle to kill two men and wound a third during a night of protests against racial injustice in Kenosha in the summer of 2020. The former police youth cadet is white, as were those he shot.

The jury appeared to be overwhelmingly white.

Rittenhouse testified he acted in self-defense after coming under attack, while prosecutors argued he instigated the bloodshed. The case has become a flashpoint in the U.S. debate over guns, protests, vigilantism and law and order.

With a verdict near, Gov. Tony Evers said that 500 National Guard members would stand ready for duty in Kenosha if needed.

During closing arguments Monday, prosecutor Thomas Binger argued that Rittenhouse set the deadly chain of events in motion by bringing a semi-automatic rifle to a protest and menacing others, then walked off like a “hero in a Western.”

But Rittenhouse lawyer Mark Richards countered that Rittenhouse was ambushed by a “crazy person” he feared would wrest away his gun and use it to kill him.

Rittenhouse, then 17, had gone to Kenosha from his home in Antioch, Illinois, in what he said was an effort to protect property from rioters in the days after a Black man, Jacob Blake, was shot by a white Kenosha police officer.

Binger said Rittenhouse was “looking for trouble that night,” and he repeatedly showed the jury drone video that he said depicted Rittenhouse pointing his weapon at demonstrators.

In making his case for self-defense on the witness stand, Rittenhouse said that Rosenbaum chased him down and made a grab for his rifle — testimony largely corroborated by video and some of the prosecution’s own witnesses.

As for Huber, he was gunned down after he was seen on video hitting Rittenhouse with a skateboard. And Grosskreutz admitted he had his own gun pointed at Rittenhouse when he was shot.

In his instructions to the jury, Schroeder said that to accept Rittenhouse’s claim of self-defense, the jurors must find that he believed there was an unlawful threat to him and that the amount of force he used was reasonable and necessary.