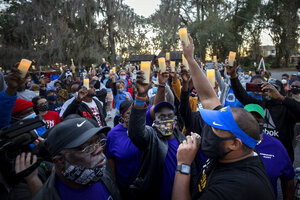 FILE - In this Feb. 23, 2021, file photo, Ahmaud Arbery's father, Marcus Arbery, bottom center, listens to Jason Vaughn speak during a memorial walk and candlelight vigil for Ahmaud at the Satilla Shores development in Brunswick, Ga. Arbery's son was shot and killed while running in a neighborhood outside the port city. Jury selection in the case is scheduled to begin Monday, Oct. 18. (AP Photo/Stephen B. Morton, File)

BRUNSWICK, Ga. (AP) — Attorneys planned to resume questioning potential jurors Tuesday in the trial of three white men charged with chasing and killing Ahmaud Arbery following a slow start and some admonishment from the judge to speed things along.

The fatal shooting of Arbery on a residential street outside the port city of Brunswick on Feb. 23, 2020, sparked a national outcry after a cellphone video of the killing leaked online two months later. Father and son Greg and Travis McMichael and a neighbor, William “Roddie” Bryan, are charged with murder and other crimes in the 25-year-old Black man’s death.

Prosecutors and defense attorneys spent hours Monday questioning the first panel of 20 potential jurors brought to the courthouse. That’s out of 600 summoned to jury duty Monday, with 400 more on deck to show up next week if needed.

The plodding pace and huge number of potential jurors underscore how Arbery’s slaying dominated the news, social media feeds and workplace chatter in coastal Glynn County. One jury panelist told attorneys he was sick of hearing about the case. Another wondered if she should fear for her safety should she be part of the final jury and the verdict angers some people.

Eight potential jurors were dismissed and the status of four others who had undergone individual questioning remained unresolved when court adjourned Monday evening.

Superior Court Judge Timothy Walmsley urged the lawyers to “streamline” their approach. More than once he stopped defense attorneys as they asked jury panelists bluntly whether they already believed the defendants were guilty —- or pressed those who expressed negative impressions of the men on trial how they would remain impartial.

“You do not ask a potential juror what their opinion on guilt or innocence is,” Walmsley warned one attorney, calling the question “inappropriate.”

Jason Sheffield, an attorney for Travis McMichael, insisted lawyers need to ask such questions to weed out jury pool members who have already made up their minds.

“Life is on the line and we feel like these are reasonable questions,” Sheffield said.

Court officials have said jury selection could take more than two weeks. And prosecutor Linda Dunikoski told jury panelists the trial itself could push into the week before Thanksgiving.

The court has not identified the race of any of the prospective jurors.

Prosecutors say Arbery was merely jogging when the McMichaels grabbed guns and chased him in a pickup truck. Bryan joined the pursuit in his own truck and recorded the now-infamous cellphone video of Travis McMichael shooting Arbery three times at close range with a shotgun.

Defense attorneys insist the three men committed no crimes. Greg McMichael told police they believed Arbery was a burglar after security cameras previously recorded him entering a nearby home under construction. He said Travis McMichael fired in self-defense after Arbery punched him and tried to grab his weapon.