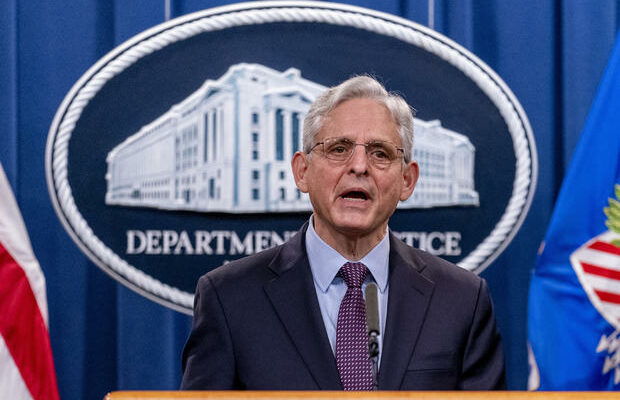 Attorney General Merrick Garland speaks at a news conference at the Justice Department in Washington on November 8, 2021.Andrew Harnik / AP

Washington — The Justice Department filed suit against the state of Texas on Monday over the state’s redistricting of congressional maps, saying the plans violate the voting rights of minority voters.

The 45-page suit, filed in the U.S. District Court for the Western District of Texas, alleges that Texas has “again diluted the voting strength of minority Texans and continued its refusal to comply with the Voting Rights Act, absent intervention by the Attorney General or the federal courts.”

Attorney General Merrick Garland and Deputy Attorney General Vanita Gupta announced the lawsuit at Justice Department headquarters in Washington. “These redistricting plans will diminish the opportunities for Latino and Black voters in Texas to elect their preferred representatives. And that is prohibited by federal law,” Gupta said Monday.

Every 10 years, the number of congressional seats in each state changes based on population figures gathered by the census, with states that have grown getting more seats and states that have shrunk getting fewer. Each state is responsible for drawing its own map to define their congressional districts. Based on the results of the 2020 census, Texas’ congressional delegation increased by two, from 36 to 38 seats.

Texas’ population grew by 4 million people over the past decade, 95% of whom were non-White, the suit said. That growth has changed the demographics of its metro-suburban areas and resulted in more competitive races for incumbent Republicans. Texas’ Republican-controlled legislature passed the state’s new map in October and took those competitive seats off the map by extending them to include more rural and Republican-leaning areas.

The Justice Department’s suit said the state “refused to recognize the State’s growing minority electorate,” and passed the new maps through an “extraordinarily rapid and opaque legislative process.”

Gupta noted that Texas’ two new congressional districts comprise areas where White voters are in the majority, despite the state’s growth being driven by minorities. The map decreased the number of districts with a majority of Hispanic voters from eight to seven by “surgically excis[ing] minority communities” from the new district in the Dallas-Fort Worth area by “attaching them to heavily Anglo rural counties, some more than a hundred miles away,” the suit said.

In a statement, Texas Attorney General Ken Paxton said the “lawsuit against our state is the Biden Administration’s latest ploy to control Texas voters. I am confident that our legislature’s redistricting decisions will be proven lawful, and this preposterous attempt to sway democracy will fail.”

“The 2021 Congressional Plan has the purpose of denying or abridging the right to vote on account of race, color, or membership in a language minority group in violation of Section 2 of the Voting Rights Act,” the complaint alleged.

Under the Voting Rights Act of 1965, states were required to get “pre-clearance” for their maps from the federal government to ensure they don’t discriminate against protected minorities. The Supreme Court struck down that requirement in a 2013 case known as Shelby County v. Holder, finding it unconstitutional and saying it violates states’ rights.

On Monday, Garland urged Congress to revive the Justice Department’s pre-clearance authority. If it were still in place, he said, “we would likely not be here today announcing this complaint.”

In a series of public hearings before the maps passed, Republican State Senator Joan Huffman, who led the redrawing process, said she didn’t look at racial data when drawing lines. Political data and numbers on previous elections were taken into account, she said.

Bob Stein, a redistricting expert at Rice University in Houston, said he doesn’t expect that the federal government will be able to prove the maps were racially gerrymandered, since Republicans used partisan data instead of racial data.

“We all know there is a high correlation between partisanship and race and ethnicity. But the court has held that partisan redistricting is not unconstitutional,” he said. “I think [the lawsuit] is like waving the flag. It’s saying to the Democrats in Texas, ‘We’re going to try and help you.'”