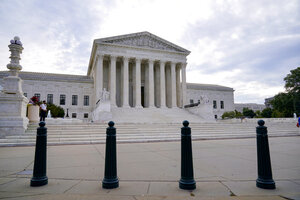 In more than 90 minutes of arguments, the court’s six conservative justices seemed likely to embrace the Biden administration’s argument that a federal appeals court mistakenly threw out Tsarnaev’s death sentence for his role in the bombing that killed three people near the finish line of the marathon in 2013.

The 1st U.S. Circuit Court of Appeals in Boston ruled last year that the trial judge improperly excluded evidence that could have shown Tsarnaev was deeply influenced by his older brother, Tamerlan, and was somehow less responsible for the carnage. The appeals court also faulted the judge for not sufficiently questioning jurors about their exposure to extensive news coverage of the bombing.

The court’s three liberal justices appeared more favorable to Tsarnaev. If the appellate ruling were affirmed, Tsarnaev would have to face a new sentencing trial if the administration decided to continue pressing for a death sentence.

Tsarnaev’s guilt in the deaths of Lingzi Lu, a 23-year-old Boston University graduate student from China; Krystle Campbell, a 29-year-old restaurant manager from Medford, Massachusetts; and 8-year-old Martin Richard, of Boston, is not at issue, only whether he should be sentenced to life in prison or to death.

Justice Amy Coney Barrett was the only member of the court to raise the administration’s pursuit of a capital sentence for Tsarnaev even as it has halted federal executions. President Joe Biden also has called for an end to the federal death penalty.

Barrett wondered about the “government’s end game,” noting that if the administration wins the case, Tsarnaev would be “living under a death sentence the government doesn’t intend to carry out.”