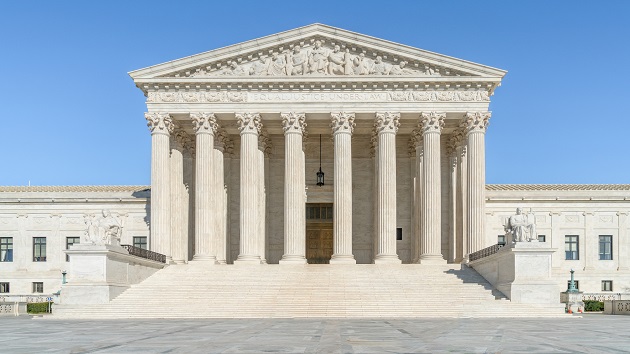 (YORBA LINDA, Calif.) — On the campaign trail, Sen. Kamala Harris often mentions that her mother, Shyamala Gopalan Harris, told her she “may be the first to do many things,” but it’s unlikely questioning a Supreme Court nominee just a few weeks before Election Day ever came up.

Harris is uniquely positioned as a Democratic vice presidential nominee and member of the Senate Judiciary Committee, which offers recommendations on Supreme Court nominees before the Senate holds a vote.

Goldstein pointed to the fact that few SCOTUS nominations have taken place during presidential campaigns and that Supreme Court nominees testifying before the Senate Judiciary Committee is relatively new. The first SCOTUS nominee to testify before the committee was in 1925 when President Calvin Coolidge nominated Attorney General Harlan Fiske Stone to fill a vacancy. Additionally, there have been few instances where a vice presidential candidate is both a senator and on the committee.

“I don’t see any historical parallels that I can find to Sen. Harris’ situation,” Goldstein told ABC News in an interview.

The closest example, perhaps, is Joe Biden’s 1987 questioning of Judge Robert H. Bork, who had been nominated for a SCOTUS vacancy. Biden led the Judiciary Committee hearings as his presidential campaign imploded amid a plagiarism scandal. Bork was never confirmed, but Biden was praised for his performance during the hearings.

Should a hearing be called in this instance, the committee, led by Trump ally Sen. Lindsey Graham, R-S.C., is expected to publicly question Trump’s nominee. The hearings typically last around four days but can be shortened or scrapped altogether.

Trump on Saturday nominated Amy Coney Barrett, barely a week after Ruth Bader Ginsburg’s death. He’d previously said he didn’t want “to do anything to cut into” funeral services for Ginsburg, the first woman and first Jewish person to lie in state at the Capitol, before her burial Friday. With about five weeks left until Election Day, a hearing could take Harris out of play for visits to battleground states, where nearly all of her campaign-related travel has been focused.

Harris’ team hasn’t made clear how she would split her time between Capitol Hill and the campaign trail if a hearing is called, but Harris made clear she opposes Barrett’s nomination.

“Just yesterday, I paid my respects to the legendary Justice Ruth Bader Ginsburg, who devoted her life to fighting for Equal Justice Under Law and a more fair and just world,” said Harris in a written statement Saturday. “Her passing is devastating, and it would be a travesty to replace her with a justice who is being selected to undo her legacy and erase everything she did for our country.”

Harris’ sharp line of questioning during Justice Brett Kavanaugh’s 2018 hearings made headlines and raised her profile before she launched her ill-fated presidential bid. This time around, as a vice presidential nominee and a frequent subject of Trump’s ire, the stakes are even higher. Goldstein believes a SCOTUS nomination hearing coupled with the Biden-Harris campaign’s inability to host large-scale events during the COVID-19 pandemic could offer an opportunity for more Americans to see Harris.

“She’s been very effective on the Judiciary Committee on other nominations. She’s a very effective questioner,” said Goldstein. “It will give the American people an opportunity to see her performance as a public servant and so it’s not clear that that’s not a good use of her time from a campaign as well as a governmental perspective.”

Thus far, the Biden-Harris campaign has largely centered the significance of the SCOTUS pick on health care, arguing that the fate of the Affordable Care Act will depend on who fills Ginsburg’s chair.