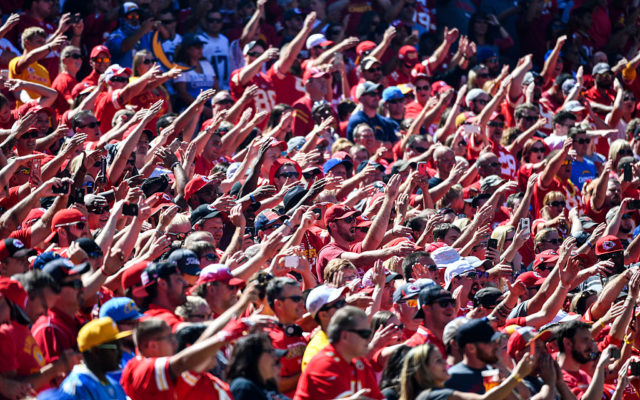 KANSAS CITY, Mo. (AP) — While other sports teams using Native American nicknames and imagery have faced decades of protests and boycotts, the Kansas City Chiefs have largely slid under the radar.

The Chiefs will appear in their first Super Bowl in 50 years Sunday against the San Francisco 49ers, and what is traditionally the nation’s largest TV audience will watch Kansas City fans break into a “war chant” and mimic tomahawk chops. Although many defend the display as a fun fan tradition, others view it as offensive and racist to Native Americans.

Plenty of franchises have been confronted over Native American stereotypes. The NFL’s Washington Redskins have faced protests since the 1980s. The Cleveland Indians were so besieged by complaints over their Chief Wahoo emblem that the baseball team removed it from all uniforms last season.

The Atlanta Braves made changes during the baseball playoffs in October after St. Louis Cardinals relief pitcher Ryan Helsley, a member of the Cherokee Nation, called a “war chant” by Braves fans disrespectful. The Braves did not distribute their traditional red foam tomahawks to fans before Game 5 of the National League Division Series.

Fans of the Chiefs, like those of the Braves, long ago adopted the chanting and arm movement symbolizing the brandishing of a tomahawk that began at Florida State University in the 1980s.

So why have Kansas City fans largely been given a pass? Many on social media wonder.

“What good comes from a bunch of Non-Natives pretending to be Native?” Kaysa Williams, 28, a Native American Democratic campaign worker in Oklahoma, wrote on Facebook.

In an interview, Williams said the chanting and chopping “dehumanizes who we are and what we stand for. There’s not really another race in the United States that has to defend whether or not they can be used as a mascot.”

Schilling believes Kansas City has gotten a pass because the traditions are, by comparison, less offensive. For example, he calls the Redskins’nickname “a dictionary-defined racial slur.”

The Chiefs, in a statement, stressed the team’s commitment to “use our platform to create an awareness and understanding of Native cultures, as well as celebrate the rich traditions of multiple tribes with historic connection to our region.”

The origin of the Chiefs nickname may have more to do with the mayor who helped lure the franchise from Dallas in 1963 than any connection to Native Americans.

Mayor H. Roe Bartle was a large man known as “The Chief” for his many years of leadership in the Boy Scouts. Team owner Lamar Hunt reportedly named the team the Chiefs in honor of Bartle.

Even the connection with Bartle has undertones that some find offensive. Though he was white, Bartle started a Scouting society called the “Mic-O-Say Tribe,” which remains active and continues to use Native American attire and language. Young participants are “braves,” and the top leader is the “chief.”

Games at Arrowhead Stadium also continue to take on the vibe of a less politically correct time. Some fans wear headdresses or face paint. A “war drum” is banged before the game. A horse named “Warpaint” circles the field after scores as fans chant and mimic the tomahawk chop.

“It’s something that brings the fans together,” Chiefs defensive tackle Chris Jones said Monday during Media Night at the Super Bowl, “but I can definitely see how there would be a misunderstanding.”

At Kansas City’s Union Station, throngs of fans have been lining up to snap photos near a massive Chiefs logo. Most defended the chants and tomahawk chops, but understood the backlash.

“It is so hard because it is such a tradition that I don’t think was begun in negative connotation,” said Cori Power, 53, a court reporter from Grantville, Kansas. “That’s where it’s hard, when the world changes and things that you’ve always done — all of a sudden — feel like they may not be an honorable thing. Traditions die hard.”

Bob Ryan, an 82-year-old retiree from Lenexa, Kansas, said the tomahawk chop and the chants “give a lot of oomph to the fans so they can participate in the game.”

The statement from the Chiefs said the team has been in discussions for six years with a group made up of “Native backgrounds and experiences.”

“We continue to celebrate American Indian Heritage Month at Arrowhead Stadium each November, and through that, have continued to educate our fans and build additional relationships in the Native community,” the team statement said. “While we are pleased with the collaboration and the work that has been done over the past six years, we know the importance of continued dialogue on these topics.”

To some, it’s not enough. Gaylene Crouser, executive director of the Kansas City Indian Center, said the chanting, chopping and face-painting are “stereotypical and mocking,” even if some people of Native American heritage abide it.

“Even if they’re die-hard fans of our home football team, they are fans in spite of the chanting, the tomahawk chop, the face-paint, the chicken-feather headdresses, not because of it,” Crouser said.

Yayoi Ito, 42, of Olathe, Kansas, sees no problem with any of it.

“This team was built a long time ago when it was accepted,” Ito said. “I don’t have any issues with it. But I can understand how maybe the younger generation does because they were taught something different than us.”