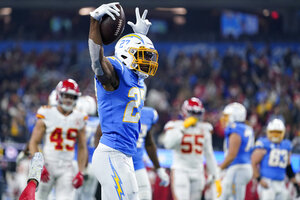 INGLEWOOD, Calif. (AP) — Travis Kelce scored on a 34-yard pass from Patrick Mahomes in overtime and the Kansas City Chiefs rallied for a 34-28 victory over the Los Angeles Chargers on Thursday night.

Kelce caught a tying 7-yard touchdown pass with 1:16 left in the fourth quarter, then ended the game with his catch-and-run in overtime. On first-and-10, Kelce pulled in Mahomes’ pass at the 30 and eluded two tackles en route to the end zone, where he was swarmed by teammates.

“Everybody is talking about him losing a step, he looked fast to me,” Chiefs coach Andy Reid said after the 32-year-old Kelce had 10 receptions for a career-best 191 yards and two touchdowns.

Mahomes finished 31 of 47 for a season-high 410 yards with three touchdowns and an interception. Kelce had been held to six total receptions the past two games, but he broke out in a big way. He had five catches for 142 yards in the fourth quarter and overtime.

“After three catches the past two games, I knew I could do a better job of working him into the mix. We threw a couple new things in there and it worked out OK,” Reid said. “His endurance down the stretch for an elder statesman — he’s not over the hill — his acceleration is something.”

Justin Herbert gave the Chargers a 28-21 lead with 2:19 remaining on a 8-yard TD pass to Keenan Allen.

Los Angeles’ defeat came after a terrifying injury to tight end Donald Parham. The 24-year-old appeared to lose consciousness after slamming his head on the turf in the first quarter. He was helped off on a stretcher and taken to a hospital, where the team said he is in stable condition.

Tyreek Hill had 12 receptions for 148 yards and a TD for the Chiefs, who have won seven straight to improve to 10-4 and remain on top of the AFC West. Hill’s 1-yard touchdown and a 2-point conversion tied the game at 21 in the fourth quarter — that score was set up by Kelce’s 69-yard catch.

It is the second straight season the Chiefs have come to the Chargers’ Hollywood Park home and won in overtime.

Herbert threw two touchdowns and ran for another score, but the Chargers (8-6) came up empty on three red-zone drives. Herbert completed 22 of 38 passes for 236 yards and an interception.

“I really liked the way we managed the entire game tonight. It didn’t go down for us today, but we gave ourselves an opportunity. We just didn’t finish the game off defensively,” Chargers coach Brandon Staley said.

The Chargers fell behind 10-0 early in the second quarter before scoring on two straight drives to take a 14-10 lead at halftime. Herbert scored on a 1-yard keeper off left end and then connected with Jalen Guyton for a 4-yard TD on the next drive.

The Chiefs benefited off Chargers’ mistakes for their first 10 points. After Los Angeles turned it over on downs, Kansas City went 95 yards in 11 plays, culminating in Michael Burton’s 7-yard run up the middle.

Chargers running back Austin Ekeler scored a touchdown for the sixth straight game with a 2-yard run off left end to extend their lead to 21-13 early in the fourth quarter. The TD came after Uchenna Nwosu tipped Mahomes’ screen pass intended for Clyde Edwards-Helaire at the KC 4 and returned it 2 yards.

It is the third time since 1994 a Chargers player has reached the end zone in at least six consecutive games. LaDainian Tomlinson had a seven-game streak in 2004 and Natrone Means had a six-game run in 1994.

Parham was being evaluated for a head injury at Harbor-UCLA Medical Center.

Parham got his hands on a 5-yard pass from Herbert in the back of the end zone on fourth-and-goal, but he dropped the ball when the back of his head hit the ground. A camera zoomed on his face showed his eyes closed and his mouth open. A teammate briefly tried to move Parham’s left arm, but it was frozen in a bent position.

Trainers and medical personnel removed Parham’s facemask from his helmet and placed him on a backboard. The 24-year-old’s arms were shaking as he was wheeled off while concerned players from both teams watched.

The Chargers could have had at least a 20-10 lead at halftime had coach Brandon Staley opted for a field goal instead of going for it on fourth down. Andre Roberts took the opening kickoff 75 yards and Los Angeles drove to the 5 before turning it over on downs on four straight incompletions by Herbert.

The Chargers could have kicked a field goal on the last play of the first half, but Herbert couldn’t connect with Allen on fourth-and-goal from the 1.

Early in the fourth quarter, Los Angeles had second-and-goal, but Ben Niemann recovered Joshua Kelley’s fumble at the 2.

The Chiefs also were not immune to red-zone failures. They were down 14-13 and had fourth-and-goal at the 2 when Mahomes’ pass to Mecole Hardman was incomplete.

Chargers: Travel to the Houston Texans on Dec. 26.