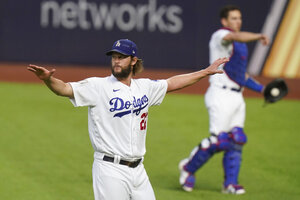 Kershaw dominated for six innings, Bellinger and Betts homered and the Dodgers chased a wild Tyler Glasnow in the fifth inning for an 8-3 win Tuesday night in the first Series held at a neutral site.

A crowd limited by the coronavirus to 11,388 at Globe Life Field, the new $1.2 billion home of the Texas Rangers, marked the smallest for baseball’s top event in 111 years.

Kershaw, a regular season star with an erratic postseason history, looked like the ace who so often stars on midsummer evenings with the San Gabriel Mountains behind him at Dodger Stadium. With these games shifted, the 32-year-old left-hander wound up pitching not far from his season home in Dallas.

The three-time CY Young Award winner allowed one run and two hits, struck out eight and walked one. He induced 19 swings and misses among his 78 pitches — more than his three previous Series starts combined. He threw nine balls in the first, when he stranded a pair of runners, then threw just nine more over the next three innings.

Kershaw retired 13 in a row before his only mistake, a fastball Kevin Kiermeier pulled for a home run in the fifth inning that cut the Rays’ deficit to 2-1. The five-time ERA champ improved to 2-2 in the World Series and 12-12 in postseason play, a shadow of his 175-76 regular season record.

Game 2 is Wednesday night. The Dodgers, who posted the best record in the majors during the shortened season and showed off all their stars in Game 1, plan to throw a collection of relievers against Rays ace Blake Snell.