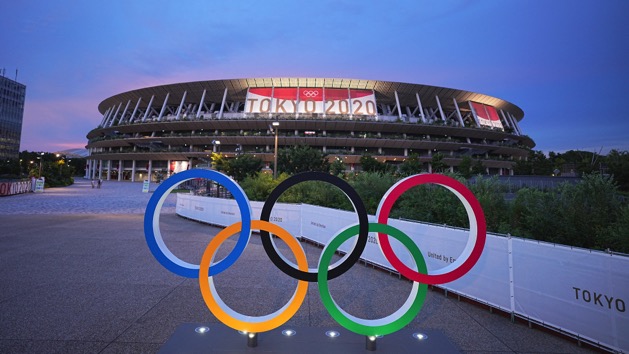 21 July 2021, Japan, Tokio: In the evening twilight Olympic rings stand in front of the Olympic Stadium. The Olympic Stadium is the sports venue of the opening ceremony and closing ceremony as well as for the track and field athletes and football. The Olympic Games 2020 Tokyo will take place from 23.07.2021 to 08.08.2021. Photo: Michael Kappeler/dpa (Photo by Michael Kappeler/picture alliance via Getty Images)

Sunisa Lee won the gold medal after a tremendous performance in the individual all-around competition. Lee’s teammate Simone Biles cheered her on from the stands as Lee delivered a strong floor exercise routine to seal the win.

Biles withdrew from the competition Wednesday so she could “focus on her mental health,” USA Gymnastics said in a statement Wednesday. Biles’ replacement in the competition, Jade Carey, finished in 8th place.

There were 24 newly confirmed cases of COVID-19 among people at the Tokyo Olympics on Thursday, including U.S. pole vaulter Sam Kendricks and two other athletes staying in the Olympic village. The total now stands at 198, according to data released by the Tokyo 2020 organizing committee.

The surrounding city of Tokyo reported a record high of 3,865 new cases on Wednesday, a seven-day average increase of 161.9%, according to data released by the Tokyo metropolitan government.

Heat continues to be a factor, tennis matches moved to later afternoon

The heat index hit 99 degrees on Wednesday, causing athletes, including the world’s second-ranked tennis player, Daniil Medvedev, to seek medical attention. The matches were moved from 11 a.m. to 3 p.m. local time to avoid the hottest part of the day, the International Tennis Federation announced in a statement.

Djokovic 2 games away from Golden Slam

Serbia’s Novak Djokovic, the top ranked tennis player in the world, is two games away from achieving a Golden Slam after defeating Japan’s Kei Nishikori 6-2, 6-0. A player would have to win all four major events and the Olympics in a calendar year, a triumph only ever attained by Germany’s Steffi Graf.