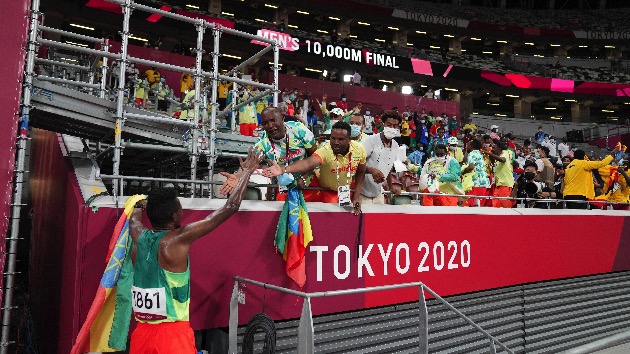 Ethiopia's Selemon Barega celebrates after winning the men's 10000m final during the Tokyo 2020 Olympic Games at the Olympic Stadium in Tokyo on July 30, 2021. (Photo by Matthias Schrader / POOL / AFP) (Photo by MATTHIAS SCHRADER/POOL/AFP via Getty Images)

US swimming brings in pair of silvers, men’s team draws attention out of the pool

U.S. swimmers Lilly King and Annie Lazor finished second and third in the 200m breaststroke, an admirable finish for the swimmers who were bested by a world-record setting effort by South Africa’s Tatjana Schoenmaker.

Murphy’s teammate Michael Andrew was notably without a mask after his fifth place finish, and after the U.S. Olympic and Paralympic Committee said he violated protocol, they later reversed their decision, according to USA Today.

There were 27 newly confirmed cases of COVID-19 among people at the Tokyo Olympics on Friday, including two athletes staying at the Olympic Village. The total now stands at 225, according to data released by the Tokyo 2020 organizing committee.

The surrounding city of Tokyo reported 3,300 new cases on Friday, a seven-day average increase of 180.5%, according to data released by the Tokyo metropolitan government. Japan has extended its state of emergency to three of Tokyo’s surrounding prefectures.

Track and field events get underway

The 2020 Olympics’ track and field events began with a fast start today; six women finished the 100m qualifying round under 11 seconds. The first medal event, the men’s 10,000m, will be held later this morning.

Team USA’s women’s basketball team increased their win streak to 51 with an 86-69 win to the host country’s team. The effort was led by A’ja Wilson who scored 20 points and Breanna Stewart who ended with 15. The team has one game left in the group round.

Serbia’s Novak Djokovic lost to Alexander Zverev 6-1, 3-6, 1-6 in the semifinals and with the loss also went his hopes of achieving the Golden Slam. A Golden Slam is accomplished by winning all four majors and winning the Olympics all in the same year. The feat has only been achieved by Steffi Graf in 1988.