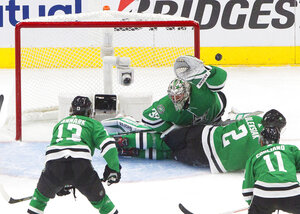 EDMONTON, Alberta (AP) — Anton Khudobin made three of his 32 saves on a crucial 5-on-3 penalty kill late, Joe Pavelski and Jamie Benn scored in the second period and the Dallas Stars are a victory away from the Stanley Cup Final after beating the Vegas Golden Knights 2-1 Saturday night in Game 4.

Dallas pushed Vegas to the brink of elimination despite being outshot 33-20. The Stars have 92 shots to the Golden Knights’ 130, yet lead the series 3-1.

Khudobin deserves credit for much of that, like when he spun his body to prevent a goal by William Karlsson in the second or dived to deny Brayden McNabb early in the third with Dallas clinging to the lead. His nonchalant glove stop on Shea Theodore during 1:10 of Vegas 5-on-3 power-play time showed how locked in he was.

The Stars also have done a masterful job of copying the way the Vancouver Canucks almost beat Vegas last round, by collapsing defensively and giving their goaltender the chance to see a vast majority of even-strength shots from the outside.

“The way the guys are battling, the way they’re blocking the shots, they have bruises and they have bumps and they still sacrifice their bodies to go and block the shots,” Khudobin said. “Unbelievable team effort, I would say. I really appreciate that. It’s huge, huge, huge.”

That strategy is working and flustering the Golden Knights, who have six goals in four games despite some high-quality chances.

“All we need is to finish,” Vegas caoch Peter DeBoer said. “I think the effort’s there. I think we’re creating a lot of really good looks.”

DeBoer’s team was also on the wrong end of some puck luck in Game 4.

After Alec Martinez cracked Khudobin with a power-play goal 7:44 into the second, a giveaway by Nate Schmidt proved costly. Andrew Cogliano, back in the lineup after being a healthy scratch for the first three games of the series, forced the turnover, Pavelski backhanded a shot and the puck deflected off Schmidt’s stick in mid-air and fluttered over goaltender Robin Lehner.

“I was happy to see that one go in,” Pavelski said.

That was the Stars’ seventh shot of the game at the same time the Golden Knights had 22. When McNabb took a bad holding penalty late in the second and Benn scored on the power play to make it 2-1, that was just Dallas’ second shot.

Vegas had killed 22 consecutive penalties before Benn broke the streak. Earlier in the day, coach Peter DeBoer was pretty matter of fact that he expected more calls against the Stars than his team.

“We’re playing the most penalized team in the playoffs and we’ve got the puck, so I expect the penalties to be in our favor, and we’ve earned that by our discipline and by how we’re playing,” DeBoer said.

The penalties were even, and so were a couple of big injuries. Dallas lost forward Roope Hintz in the first period, and he didn’t return. Vegas winger Mark Stone went to the locker room in pain after taking a shot from Pavelski off his right foot, and he was still wincing in pain upon his return in the third.

NOTES: Vegas was without injured forward Tomas Nosek. Nick Cousins replaced him in the lineup. … Stars winger Radek Faksa was “unfit to play,” according to coach Rick Bowness. … Vegas fell to 10-2 when scoring first this postseason.

Game 5 is Monday night after the New York Islanders and Tampa Bay Lightning play Game 4 of the East final Sunday,