Kids of all ages among migrants in caravan across Mexico 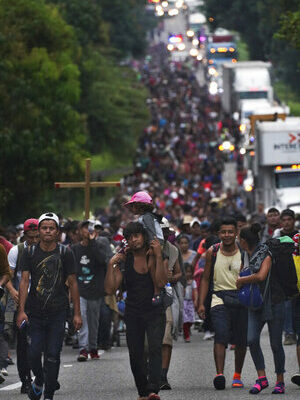 ESCUINTLA, Mexico (AP) — When a few thousand migrants resumed their walk north through southern Mexico Thursday, the chatter of stroller wheels on pavement accompanied the slap of feet. Still-sleeping children slumped as the caravan lurched forward. Others, still drowsy, perched on parents’ shoulders.

The caravan made up of mostly Central American migrants left Tapachula near the Guatemala border on Saturday and roughly doubled in size as it covered the 45 miles (73 kilometers) to Escuintla.

Migrant-rights advocates and aid workers travelling with the caravan estimate there could be 1,000 children among the estimated 4,000 people trudging along highways under a punishing sun.

The scene is reminiscent of larger migrant caravans in 2018 and 2019 that were also full of families with young children. The caravans have offered a less expensive, albeit much slower, way to migrate for families without the money to pay smugglers. They also carry the advantage of safety in numbers.

Laura Benítez with the humanitarian aid organization Global Response Management, said that children account for 40% of those in the caravan that they have given medical treatment to.

“The majority are blisters on feet, chafing,” Benítez said. “The children have some little cuts, scrapes and bug bites. Besides that we’re giving medicine for headaches, muscle pain, also fever and we’re giving (rehydration).” (rehydration solution?)

Irineo Mújica, of the immigration advocacy group People without Borders, estimated there were between 1,000 and 1,200 children in the caravan. “It is urgent that the Mexican government attend to the children,” he said.

José Avila Lagos and his wife Yolanda Melgares bought two strollers in Tapachula before setting out because they’re travelling with their three children ages 6, 9 and 15.

“(The kids) get hot and tired from walking and you have to bring them in this, Avila said, indicating to the stroller. “You have to spend.”

The truck driver said they left Honduras because of the poverty. The pandemic had made it harder for him to find work.

Ingrid, a Guatemalan woman who declined to give her last name due to safety concerns, said that she was travelling with her whole family — four adults, eight children and a 5-month-old baby.

“We just can’t cope, with all the kids. We’re from Guatemala, we’ve already been stuck in Tapachula for two months,” she said.

Frustration has been growing for months among the thousands of migrants waiting in Tapachula near the Guatemala border. Mexico’s strategy had been to contain migrants in the south, far from the U.S. border while allowing them to apply for asylum in Mexico.

But Mexico’s asylum system has been overwhelmed and the slow process led many to decide it was not worth waiting.

“We need them to give us free passage; we ask the president to have a heart,” Ingrid said while the family rested in the shade of a tree Thursday.

While smaller migrant groups that attempted to walk out of Tapachula recently were broken up by authorities within a couple days, the current caravan is larger and has been walking since Saturday. Authorities tried to block it from leaving Tapachula that day, but since then have not interfered.

The caravan formed ostensibly as a form of protest and organizers said the goal was to march to Mexico City to pressure the government to resolve the immigration crisis in the south. However, the majority of those walking appear to have their sights set on the United States.

Luis García Villagran, of the Center for Human Dignity, a nongovernmental organization in Tapachula involved in organizing the march, said the plan was to demand everyone receive permanent residency when they arrive in Mexico City.