Kinzinger goes to Texas in search of anti-Trump Republicans 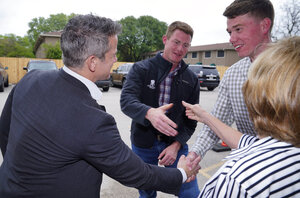 The Illinois congressman was looking for Republicans who, like him, see former President Donald Trump as a scourge on their party and a threat to democracy. Kinzinger met privately with one sympathetic Republican, former President George W. Bush, on his first day in the state. And on the second, he had lunch with Michael Wood, the only openly anti-Trump Republican competing on Saturday in a crowded special election for a seat in Congress.

Kinzinger, a 43-year-old Air Force pilot who flew missions in Iraq and Afghanistan, is positioning himself as a leading antagonist to Trump in a party that is largely refusing to move on from the former president. The congressman’s nascent political organization, Country First, has endorsed every House Republican who voted to impeach Trump for inciting the deadly Jan. 6 riot at the U.S. Capitol. And as Kinzinger eyes a potential run for higher office himself, he came to Texas to test how many other Republicans share his outlook.

Kinzinger’s hope lies in Wood, another fresh-faced combat veteran, who is fighting to stand out in a field of 23. If none of the candidates on Saturday’s ballot earns 50% of the vote, the top two will compete in a runoff election later in the spring.

“The Trump thing, it’s got nowhere to go but down. It’s not growing,” Kinzinger said during his lunch with Wood at the Fork in the Road cafe in the Dallas suburbs. “But it took a lot of time for the Republican Party to be what it is today. It may take a lot of time to bring it back.”

The contest to replace Republican Rep. Ron Wright, who died of COVID-19 in February, has gone virtually unnoticed outside this north Texas district. But it offers a window into the forces tearing at the fabric of today’s GOP. There are 10 Republicans among 23 candidates on the ballot, and with the exception of Wood, they are all desperate to win over Trump and his supporters.

Republican Brian Harrison, former chief of staff of the Department of Health and Human Services, has played up his role in the Trump administration. So, too, has Sery Kim, who worked in the Small Business Administration and directly implored Trump for his endorsement during an appearance on Newsmax, where she gave out her phone number. Dan Rodimer, a former professional wrestler, has flashed the endorsement Trump gave him last year during a failed run for a congressional seat in Nevada. His new slogan: “Make America Texas Again.”

Trump waited until five days before Election Day to give his formal endorsement to the congressman’s widow, Susan Wright, who is widely seen as a favorite.

In his campaign to reject Trumpism, the Illinois congressman is outmatched by every measurable metric. Polls suggest that as many as 8 in 10 Republicans continue to support Trump. And while Kinzinger’s political team celebrated raising $2.2 million last quarter, Trump’s political operation is sitting on at least $85 million.

When asked about Kinzinger, Trump spokesperson Jason Miller dismissed him as “a future MSNBC contributor.”

Yet Wood has also drawn financial and moral support from a handful of other Trump critics in Congress, including Reps. Liz Cheney, R-Wyo.; David Valadao, R-Calif.; and Peter Meijer, R-Mich. Like Kinzinger, all three voted to impeach Trump.

Kinzinger said he was drawn to Wood by the 34-year-old former Marine infantry officer’s political courage. Wood has been booed at Republican campaign events for saying that the GOP has devolved into a “cult of personality.” The first line of campaign literature he hands to voters declares, “The Republican Party has lost its way…”

In an interview, Wood, who earned two Purple Hearts for his service in Afghanistan and now runs a small business, compared Trump to a “less intelligent, lazy and disorganized” autocrat like Roman emperor Julius Caesar. He warned that freedom itself is at risk if Trump and what he stands for aren’t soundly rejected.

“I don’t want to go to Congress if I have to lick Donald Trump’s boots to get there,” he said.

Still, Kinzinger knows more than most just how difficult it will be to persuade Republican voters anywhere — never mind Texas — to turn against Trump. The congressman’s political operation recently commissioned polling that found the most sympathetic voters are what one aide called “unicorns” — Republicans who are moderate politically, don’t regularly watch Fox News, reject conspiracy theories and are highly educated.

It’s a pool of voters Kinzinger needs to grow if his effort will be successful in Texas and beyond as he eyes an aggressive role in the 2022 midterms.

Wood estimated that such voters may represent as many as 35% of those who decide Saturday’s special election. Sympathetic strategists suggest the number is probably much lower.

That’s not to say there aren’t warning signs for Trump and his supporters.

Trump won the north Texas district by double digits in 2016, but by just 3 points last fall, reflecting the trend of Texas’ booming suburbs shifting to purple and, in some places, outright blue.

But outside the Mansfield Municipal Courthouse this week, there was little sign of support for Wood among the Republicans waiting in line to cast early ballots. One said Wood was betraying his country; another called him an embarrassment.

“There’s no such thing as an anti-Trump Republican. He should find another party,” said 71-year-old white retiree Gordon Powell of Mansfield. “I doubt that he could run for dog catcher as a Republican and get elected around here.”

Yvette Williams, a 54-year-old African American transplant from California, said she’d consider Wood if she didn’t vote for a Democrat. She applauded his effort regardless.

“I’m like, ‘Who in the Republican Party can stand up to Trump?’ It takes one person to make a difference,” she said.

For their part, there are 10 Democrats running in the special election. But after high expectations and heavy spending failed to produce a single significant victory last year, the national party is largely steering clear of the race.

And while many rank-and-file Texas Republicans remain loyal to Trump, Kinzinger has won the respect of one of Texas’ most prominent Republican officials.

Kinzinger and his wife met privately with former President Bush and former first lady Laura Bush for roughly an hour Monday evening at Bush’s office at Southern Methodist University. Kinzinger said they discussed foreign policy, the support among evangelical Christians for Trump and shared concerns about the direction of the party.

“He’s obviously, as he’s expressed, concerned with where we’re at and knows it’s a slog to kind of bring it back,” Kinzinger said of Bush. “But it’s like, if you don’t fight, it’s done.”

A Bush spokesperson declined to comment on the meeting.

Meanwhile, Wood said it’s past time for more people in his party’s leadership to stand up to Trump publicly.

“I hope that, win or lose, I at least show the rest of the country there are people willing to stand up and say these things. Frankly, I’m a little upset it’s someone like me who’s saying them. It should be shouted from the rooftop by leaders in the House, Republicans in Senate, Republicans across the country.”