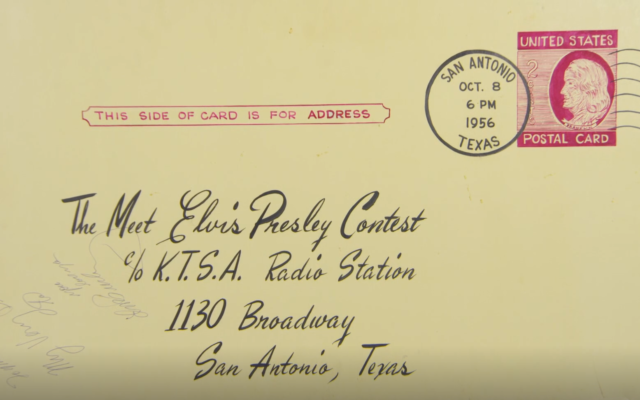 A woman named Yvette was on the show with an oversized postcard her mother used in 1956 to win a KTSA contest to meet Elvis Presley.

“Elvis was really big in 1956. Of course, that was the beginning of his career. And our local radio station, 55 KTSA, had a contest where you could win a, a date with Elvis when he came to San Antonio for a concert series,” Yvette told the appraiser. “And you just had to write on a postcard why you deserved a date with Elvis.”

I think I should be the winner of EPC because…

I love your escapes
Which are some people’s debates
But who’s complaining,
It’s you who’s fame gaining.

Wherever you go,
Whomever you meet
There’s always somebody
Who will be so discreet.

I just want to add,
That if I were to have
But on singer to choose,
Surely you couldn’t lose.
For my only choice
Would be your wonderful voice.

Yvette said Marie was friends with a man who painted window signs and did store displays and they developed the idea of a “supersized poster postcard.”

The entire card was hand-painted. On one side was the poem.  The other was a postage stamp, postmark, and the radio station’s address — back when the studios were at 1130 Broadway.

The postcard was hand-delivered to the station and Marie was selected.

For winning the contest, she got to sit backstage for two of Elvis’ shows in San Antonio.

“And he would wink at her from the stage, and she just felt just tickled,” Yvette explained.

Presley signed the card, writing, “To Marie, My very best to you. Love you, Elvis Presley.”

Yvette also had a photo of her mother looking on as Presley signed the card.

“He basically was on record as stating that he owed everything to Texas because this is the state that put his career over the top,” appraiser Lisa Ramaci explained to Yvette on the show. “He came to Texas three times in the, in 1956. The very first time he came, he was pretty much of a hellion, because he was young– he was just getting famous. But by this time, by October ’56, he had calmed down, and he was starting to do press junkets. He participated in this contest, and I’m sure that he was thrilled to get this poem that your mom wrote.”

Another guest appeared on the show at the McNay Art Museum with a program from the Louisiana Hayride in Shreveport, Louisiana, signed by Elvis Presley and Johnny Cash in 1955.

Betty explained how she got their signatures:

“Well, when I was in high school, in the ’50s, we loved to go to Shreveport, to the ‘Louisiana Hayride,’ on the weekends. My sister and I and some more girls would go often, and I was about 16 years old then– a long time ago. And Elvis was there, and Johnny Cash, and they weren’t popular like they are now. So, anyway, Elvis was standing on the steps there by himself, and so I just had this book, and I went up to him and asked him if he’d mind giving me his autograph.”

Appraiser Laura Woolley asked Betty what she thought of the nascent star at the time.

“Really good-looking. He was young, then, too. You know, it was before he married. And I heard he made $18 a performance at that time. So he was making big money, wasn’t he?”

As for the Cash signature?

“Johnny Cash, it was at the same time. He was there, too, and he was just standing in the doorway during intermission, waiting to go back on.”

And her thoughts on him?

“Another handsome one,” Betty replied with a chuckle.

Presley — and Cash, for that matter — were both “so” popular that neither of their names even made it into the program!

“They were not famous enough yet to even be listed among the performers at the ‘Louisiana Hayride,'” Woolley stated.

KWKH’s Louisiana Hayride would eventually push both artists to stardom.  It was also where the phrase “Elvis has left the building” originated.

The site of the show — the Shreveport Municipal Auditorium, which still stands and had been renovated in the past decade with plans of hosting modern music events — itself is a treasured piece of music history for being the launching point of many music careers.