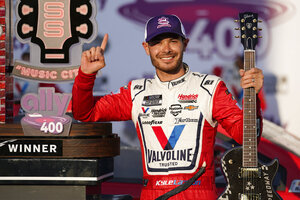 FILE - Kyle Larson celebrates with the winner's guitar and trophy after winning a NASCAR Cup Series auto race at Nashville Superspeedway in Lebanon, Tenn., in this Sunday, June 20, 2021, file photo. Rick Hendrick gave Kyle Larson a second chance in NASCAR because Hendrick Motorsports had wanted him in its lineup for years. Now that Hendrick has his man, he's locked Larson down for two more seasons with full sponsorship. Hendrick on Wednesday, July 14, told his 93 dealerships that the hottest driver in motorsports signed a contract extension through 2023 and Larson will be fully sponsored by HendrickCars.com. (AP Photo/Mark Humphrey, File)

CHARLOTTE, N.C. (AP) — Rick Hendrick gave Kyle Larson a second chance in NASCAR because Hendrick Motorsports had wanted him in its lineup for years. Now that Hendrick has his man, he has locked Larson down for two more seasons with full sponsorship.

Hendrick on Wednesday told his 93 dealerships that the hottest driver in motorsports has signed a contract extension through 2023 and Larson will be fully sponsored by HendrickCars.com.

It may seem like the sponsorship is all Rick Hendrick’s money anyway, but the sponsorship for 35 races the next two years is paid for from the marketing budget of Hendrick Automotive. The deal is somewhat unprecedented because the website will also sponsor Larson in all his non-NASCAR events with branding on the nose of his dirt cars, helmets, gloves and firesuits.

“My dealerships, the general managers and the employees, they didn’t want anyone else on the car,” Hendrick told The Associated Press.

Larson joined HMS this season on the cheap after a nearly yearlong NASCAR suspension for using a racial slur. Sponsors were initially skittish so the Hendrick website for new and used cars bought some of the ad space on the No. 5 Chevrolet.

The site has been on Larson’s car in 14 races so far this season but only three of his five NASCAR victories. A different sponsor was on the car when Larson won at Charlotte Motor Speedway in May to make Hendrick the winningest team in NASCAR history and the automotive group was not pleased.

Hendrick told AP his marketing team at Hendrick Motorsports was actively selling Larson sponsorship and had offers, but the team owner halted all conversations when his automotive group said it wanted the ad space.

“I bumped it up about 20% once automotive committed,” Hendrick said. “We had one deal for the whole thing, so I made them step up and at least match the offer. And they did, they want as much as they can get.”

The top stars in NASCAR for years were identified by their sponsors but the branding faded in an unsustainable economic model and teams have been forced to sell ad space on their cars in chunks to multiple companies.

Ally, the sponsor for Hendrick driver Alex Bowman, is the only current company in the Cup Series with a full season of sponsorship and HendrickCars.com would have matched that commitment if Valvoline had not already bought three races for next year on Larson’s car; that deal is expected to continue in 2023.

“When we race on Sunday our people are excited when they get to work on Monday,” Darryl Jackson, vice president of financial services for Hendrick Automotive Group, told AP. “By the water cooler, on the showroom floor, in the service center, they are talking about their car. It is ‘My driver. My team.’

“When you put that together with the business, it just makes sense. More leads sell more cars, right? We’ve got to advertise somewhere, so why not advertise on one of our assets?”

Larson has won a Cup Series-high four points races this season, as well as the $1 million All-Star race. He is second in the championship standings and has won 10 times so far this year in non-NASCAR events.

He races at dirt tracks all over the country and has 56 wins since the start of 2020 — most of those coming outside of NASCAR during his 32-race suspension for using the slur while participating in an online race at the start of the pandemic.

Hendrick hinted at his automotive arm keeping the sponsorship following Larson’s win at Nashville last month and said he wouldn’t sell the No. 5 car in a “piecemeal deal because I think it’s worth more to me than to do that.”

Jackson said since the paint scheme was revealed in February, traffic to the HendrickCars.com website has exploded. Five of the six highest-trafficked days this year followed races in which Larson contended with the website as his sponsor.

“He’s created total lead generation value of $1.8 million and over $5 million in television exposure,” Jackson said. “And we haven’t even gotten to the (playoffs) yet.”

Seven-time champion Jimmie Johnson retired from NASCAR at the end of last season and inked a sponsorship deal with Carvana for his transition from Hendrick Motorsports to IndyCar. Carvana has made significant ad buys during NASCAR races, but the Hendrick group insisted it felt no competitive pressure to increase its presence.

“Look, Kyle’s on-track performance and what we saw on the business side is what drove us to make this decision,” Brian Johnson, vice president of marketing at Hendrick Automotive Group, told AP. “Kyle has elevated our business platform in such a tremendous way that this makes sense. As someone who is responsible for our advertising spend, and all things have remained equal except for the addition of Kyle, I don’t know how else you correlate what he’s doing for the company.”

Exiled from NASCAR this time last year, the 28-year-old Larson would not have dreamed of such a fortunate turn in his career. He grew up a Jeff Gordon fan and to this day links the Hall of Famer with sponsor Dupont and its rainbow and flames paint schemes.

Larson was backed heavily by Target at the start of his NASCAR career but in eight seasons has never had one company fully committed to him.

“I want to be at Hendrick for the rest of my career and if I can have this sponsorship attached to me, I think that goes a long way for my brand and my fanbase,” Larson told AP. “Someday when I’m retired from Cup and only racing dirt cars, maybe they can back me there, too. … I feel like we’re just scratching the surface of what’s possible.”