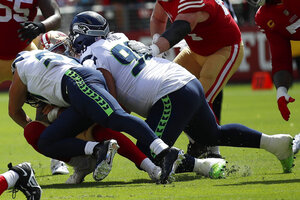 SANTA CLARA, Calif. (AP) — Trey Lance underwent season-ending surgery on his broken right ankle Monday, leaving the San Francisco 49ers to go ahead with the rest of the 2022 season with former starter Jimmy Garoppolo back in the helm.

Lance got hurt in the first quarter of San Francisco’s 27-7 win over the Seattle Seahawks on Sunday when he kept the ball on a run play up the middle.

But for now, the Niners (1-1) are in Garoppolo’s hands and they feel very fortunate they were able to keep their former starter on a reduced contract this season in case something happened to Lance.

“I don’t want to downplay what happened to Trey, because we really do feel for him, but this is why you buy insurance,” fullback Kyle Juszczyk said. “You don’t want to have to use it, but Jimmy was kind of our insurance policy.”

Instead of the Lance injury derailing a season for a team that believes it can contend for the Super Bowl, it just puts the Niners back where they were last year when Garoppolo helped them get to the NFC title game with Lance as the backup.

San Francisco planned to trade Garoppolo this offseason, but was unable to after he underwent shoulder surgery in March.

Garoppolo remained on the roster but didn’t practice with the team at all during training camp, throwing on his own on a side field, before agreeing to return as a backup on a reduced contract.

Instead of the nonguaranteed $24.2 million base salary Garoppolo was owed this season, he will get a $6.5 million fully guaranteed base salary, $500,000 in roster bonuses and the chance to make nearly $9 million more in playing time bonuses.

Garoppolo made $350,000 in bonuses Sunday for playing at least 25% of the snaps and the Niners winning the game.

“It definitely turns out to be a very smart move for us,” defensive end Nick Bosa said. “The fact that we have a quarterback who’s done so much for this organization already and has all the experience that he has, and the fact that we get him back, is very big for our team. We’re excited for him, but obviously we’re hurting for Trey.”

Garoppolo threw a 38-yard TD pass to Ross Dwelley on his first full drive and finished 12 for 21 for 154 yards with no turnovers.

The offense changed a little this offseason as it was geared toward Lance, but Garoppolo didn’t take long to feel comfortable in it.

“It just felt good,” he said. “We were talking earlier, it kind of felt like 2017, where you just go out throwing, make plays, that’s what I like to do. It’s different than what we usually do around here, but sometimes you need to do that.”

Defense. San Francisco didn’t allow a single scoring drive against the Seahawks with Bosa leading a ferocious defense. The Niners have allowed fewer than 220 yards in each of the first two games of the season, joining the 2017 Panthers as the only teams to do that in the past 14 seasons. Bosa had two sacks and five QB hits in another dominant performance.

Field goal unit. One of the few mistakes on Sunday came on special teams when Dwelley got beat inside by Tariq Woolen, who blocked a 20-yard field goal attempt by Robbie Gould. Michael Jackson scooped it up and ran 86 yards for Seattle’s only score.

Jeff Wilson Jr. once again looked good in an opportunity as the running back. He had 18 carries for 84 yards and added two receptions for 19 yards. In nine career starts, Wilson is averaging 81.5 yards rushing per game.

Lance’s development. The Niners invested three first-round picks to trade up for Lance in the 2021 draft and now won’t know until at least his third year if that was a wise move. Lance started only two games as a rookie and played less than five quarters this year before getting sidelined. Lance played only one game in college in a pandemic-altered 2020 season after one year as a starter at lower-level North Dakota State.

That means that whatever San Francisco does next year at quarterback, there will be questions about whether Lance can handle the job.

TE Tyler Kroft (knee) left the game in the second half and didn’t return. … The 49ers are hoping to get TE George Kittle back this week after he missed the first two games with a groin injury.

One. A week after committing six penalties on defense leading to five first downs, the Niners played a much cleaner game. The only penalty the defense committed was a tight pass interference call against Emmanuel Moseley that negated an interception by Fred Warner.

The 49ers travel to Denver on Sunday night.