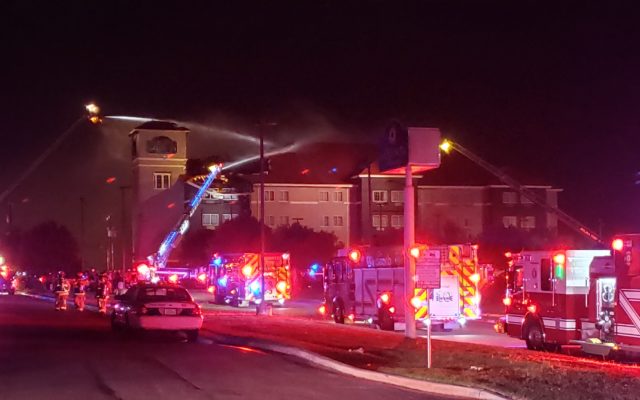 Fire tears through the La Quinta Inn and Suites on FM 3009 in Schertz. (Photo: KTSA/Don Morgan)

Three people were hurt in a hotel fire in Schertz Saturday night.

The City of Schertz said its firefighters responded to the fire at the La Quinta Inn and Suites off of FM 3009 at around 8:50 p.m. to find smoke coming from the top floor and attic of the hotel.

The Hedwig and New Berlin fire departments filled in for Schertz firefighters should any other call come in while the city’s entire fire department fought the fire.

The city said the preliminary review of the building shows extensive water damage to the lower floors and fire and smoke damage to the fourth floor and attic.

The City of Schertz said 146 people were evacuated from the hotel and sent to other hotels in the area.  Three people were injured in the fire, but they have all been treated and released.  A dog was also found on the third floor not moving, but Schertz EMS and Animal Control were able to assist the dog in making a full recovery.

The cause of the fire is still being investigated.

SCHERTZ, Tex. (KTSA News) — A massive fire is burning at the La Quinta Inn and Suites on FM 3009 near Interstate 35.

Officials tell KTSA News everyone in the hotel has been safely evacuated and multiple fire departments are on the scene.

It is not clear what started the fire.