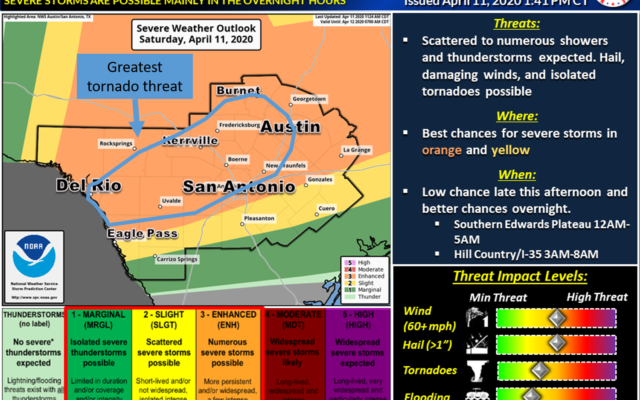 CONVERSE, Tex. (KTSA News) — Large hail and strong winds — including the chance for a strong tornado — are possible from the Rio Grande to Austin overnight Saturday into early Easter Sunday morning.

The National Weather Service office in New Braunfels said an upper level storm system will be moving across South-Central Texas that will generate several strong to severe storms along the Rio Grande.  That will push to the east toward the Hill Country and the Interstate 35 corridor into the next morning.

The biggest threats from this storm are large hail, damaging winds and possibly a few tornadoes — and the danger of them occurring overnight.

Forecasters say among the few potential tornadoes, there is a chance for a strong tornado — an EF-2 or greater in strength.  Otherwise, there will be wind gusts of 70 miles per hour or greater, large hail up to 2 inches in diameter (roughly egg sized) and isolated pockets of one to two inches of rain that could cause localized flooding.

The storms are expected to impact the Hill Country between 2 a.m. and 5 a.m. and the Interstate 35 corridor between 4 a.m. and 7 a.m.