Largest land bridge in the United States opens in San Antonio’s North Side. 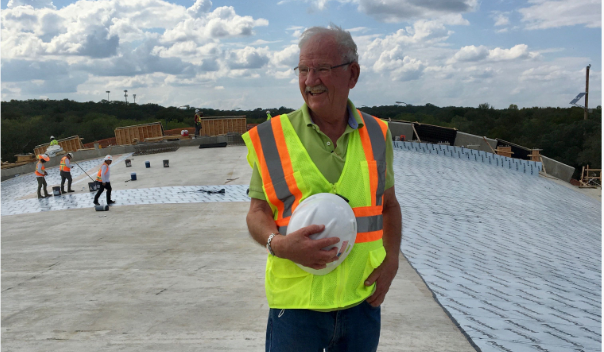 SAN ANTONIO (KTSA News) – It’s been ten years of work, some controversy and a bond issue, but the $23 million land bridge, the largest wildlife crossing in the United States, is now open at Phil Hardberger Park in San Antonio’s North Side.

The Robert L.B. Tobin Land Bridge over Wurzbach Parkway opened Friday with no formal ceremony or major celebration because of COVID-19, but people were in the park, ready to use the wildlife crossing when the construction barrels were removed.

Former Mayor Phil Hardberger, who raised $10 million in private donations for the land bridge , says it’s one of the largest projects he’s worked on and he was pleased to see people enjoying it on opening day.

When he first started working on the land bridge project, it was mired in controversy.   Opponents called it the “critter bridge” while complaining that the money would be better spent on the basics–streets, drainage and potholes, but in 2017, voters approved $13 million in funding.

Hardberger says the bridge has an important function, allowing  pedestrians and natural habitat to travel safely between both sides of the 300-acre park that’s divided by  six lanes on Wurzbach Parkway.

“Now the animals can go wherever they want to go,” said Hardberger. “They can go to one side for water.   They can go to the other side  for particular foliage that they enjoy eating.”

Frequent visitors also will be able to the see the maturation of the vegetation that’s being planted in the area.

“To make animals want to go across it and feel at home, they’ve got to feel dirt under their hooves and have plants around them that they can eat,” Hardberger said

Crews are planting cedar elms and Texas Live Oaks in the area.

“You’ll find that throughout the park, as well.  They’re very hearty, very strong.  They withstand a lot of heat,” said Hardberger.

Crews also are putting the finishing touches on the unique Skywalk, which Hardberger expects to be complete in about two weeks.

He said when the vegetation and the trees are grown, the land bridge will look like a hill, blending in with the park.  When it’s all said and done, he believes this will be one of the most iconic sites in San Antonio, behind the Alamo and the River Walk.

What you should know about the land bridge at Phil Hardberger Park :