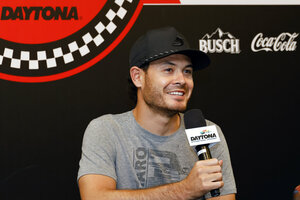 CHARLOTTE, N.C. (AP) — NASCAR champion Kyle Larson has signed a three-year contract extension through 2026 with Hendrick Motorsports, the team that welcomed him back last season after a nearly one-year suspension.

The extension announced Friday includes sponsor HendrickCars.com, which will sponsor the No. 5 Chevrolet for 35 races a season. Larson’s extension and the sponsorship renewal are concurrent. The original deal for HendrickCars.com to become Larson’s primary sponsor was announced last July when Rick Hendrick’s online automobile site pulled massive traffic spikes whenever it was featured on Larson’s car.

The 30-year-old Larson was suspended for most of 2020 for using a racial slur and lost his job with Chip Ganassi Racing. Hendrick took him when the suspension was lifted, and Larson won 10 races last season and his first Cup title.

“When Kyle joined our team, the expectations were sky high from both inside and outside the organization. To say he’s exceeded them would be an understatement,” Rick Hendrick said. “Not only has Kyle proven himself as a champion driver, he’s performed at a championship level outside of the race car. We’re proud to continue our relationship and to see him represent our team and our brands in such positive ways. The years to come are very bright.”

HendrickCars.com also will continue to support Larson in his non-NASCAR racing.

“I can’t explain how much this opportunity means,” Larson said. “The chance to compete for the top team and best sponsors in racing is something every driver dreams about. I’m humbled to have incredible people in my corner and amazing support from so many fans.”

Hendrick Automotive Group said it has measured a three-to-one return on its marketing investment in NASCAR through HendrickCars.com. The website’s highest-traffic days of 2022 have been associated with NASCAR-related initiatives, and the company also has utilized Larson as a spokesperson for its corporate social responsibility programs.

Larson heads into Saturday night’s elimination playoff race at Bristol Motor Speedway ranked eighth in the standings. The bottom four drivers in the 16-driver field will be eliminated Saturday night.