Larson to highlight charitable causes in return to iRacing 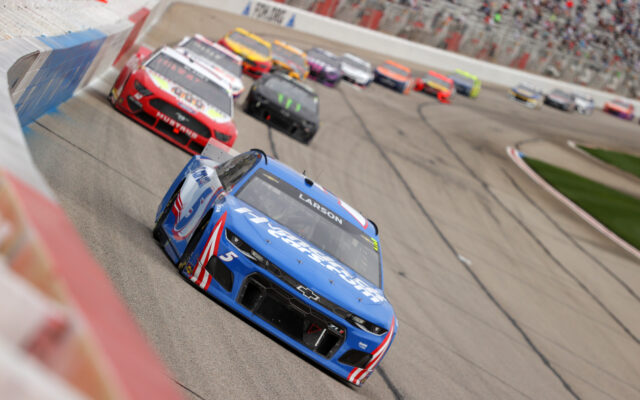 CHARLOTTE, N.C. (AP) — Think of iRacing and Kyle Larson and the first thing that comes to mind is his use of a racial slur while participating in a late-night session nearly a year ago.

Of course it is, and Larson knows that. He can’t escape that he said the N-word, he can only continue to move forward in his bid for redemption and the work he’s done to repair the damage.

Larson will make his return to the popular online racing platform Wednesday night when NASCAR launches the 10-race eNASCAR iRacing Pro Invitational Series. The car he’ll use will be “sponsored” by the Kyle Larson Foundation and feature three organizations he’s designated for support.

Larson’s “Drive for 5 Campaign” was launched this month to benefit children, families and communities in need of support. His mission is to fund five scholarships a year at the Urban Youth Racing School in Philadelphia, to provide daily meals for five families per day through The Sanneh Foundation, and support at least five communities per year through the school grants provided by Hendrick Cares.

All three organizations will be featured on Larson’s No. 5 Chevrolet in the iRacing Series and Larson funds the “Drive for 5 Campaign” through his on-track performance. He’s pledged $5 for every lap completed this season and $5,000 for each top-five finish. Through the first five races of the NASCAR season, Larson has committed $22,205 via three top-fives and 1,441 laps.

“I’m hoping to raise $500,000,” Larson told The Associated Press. “I’ve got a long ways to go but I’m glad that I’ve gotten it started and that I’m able to showcase the organizations I’ve joined to help make a difference.”

The three organizations earmarked by Larson’s foundation aren’t random. All three played an integral role in the work he did on educating and improving himself during a NASCAR suspension that lasted all but the first four races of the 2020 season.

“I wanted to start a foundation for some time, I just didn’t really ever know exactly what I wanted it to be about,” he said. “I wanted it to be around kids, but I just needed something that was really close to me and personal to me, especially the things I went through last year.”

One of the first people Larson reached out to after he’d been suspended was retired soccer star Tony Sanneh, whose foundation works on youth development and empowerment in the Minneapolis area. Larson went to visit Sanneh and volunteered at the foundation in the weeks before the city — and the nation — were rocked by the death of George Floyd in police custody in May.

Sanneh put Larson to work sorting dozens of pallets of food and distributing them to 400 cars a day. When Larson returned to Minneapolis after Floyd’s death, Sanneh took him to the site where Floyd died and they toured parts of the city heavily damaged in protests over racial injustice.

A friendship began and on “Giving Tuesday” last December, Larson launched a drive to raise $50,000 for Sanneh’s Holiday Giving program. Many of Larson’s friends in the racing community contributed and helped push Sanneh to $186,635 — well past the foundation’s initial $150,000 goal.

“I think he’s been trying to get back to normalcy but I think he’s also changed the way he’s approached life,” Sanneh said. “This isn’t like a big smokescreen or sham. He’s interested in continual growth and getting back to being himself. This has been hard on him and people assume when you make a mistake, with cancel culture, well it doesn’t define who we are. Our life’s work does, so I’m glad he’s continued to do the work.

“Some people do a few things and then say, ‘OK, that’s behind me and I just want to concentrate on racing because that’s what I love.’ But he wants to do it all.”

After his suspension, Larson also resumed work he’d done earlier in his career with the Urban Youth Racing School, a nonprofit that helps minorities advance in motorsports. And Hendrick Cares is a charitable arm of Rick Hendrick’s empire.

It was Hendrick who reached out to Larson following his firing last April to offer emotional support. As Larson worked through NASCAR’s reinstatement program, he found a second chance with Hendrick at the race team driving the No. 5 Chevrolet. Hendrick believes so strongly in Larson that he’s funding the car out of pocket convinced sponsors will see who Larson really is and eventually partner with one of NASCAR’s most talented drivers.

That hedge is slowly starting to come together and Freightliner, a Hendrick partner since 2004, will become a primary sponsor for the first time in its relationship with the team when it is featured on Larson’s car this weekend at Bristol Motor Speedway. Freightliner is the first non-Hendrick company to sponsor Larson so far this season.

Larson has one win already this season and led a race-high 269 laps Sunday at Atlanta Motor Speedway, where he was headed to victory until a late pass cost him a second win. The race was five days after shootings at three Atlanta-area spas killed eight, including six women of Asian descent.

Larson is Japanese-American and his maternal grandparents were held in an internment camp during World War II. He told AP that prior to this educational journey of self-improvement, the Atlanta shootings might not have even crossed his radar.

“It now takes me to what I have witnessed and learned over the last year with African-Americans, and it’s a pretty similar thing with Asians,” he said. “It hits even closer to me because I am Asian-American and I think had I not gone through what I did last year and not seen things firsthand, maybe it wouldn’t have meant as much to me now. It definitely does and I hope there is change that will come.”