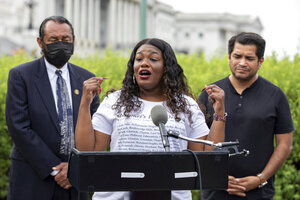 Several progressive lawmakers on Tuesday introduced a bill that would reimpose a nationwide eviction moratorium at a time when deaths from COVID-19 are running at their highest levels since early March.

Sen. Elizabeth Warren, D-Mass., and Rep. Cori Bush, D-Mo., said the bill would direct the secretary of Health and Human Services to implement a ban on evictions in response to the COVID pandemic. It would also amend a section of the Public Health Service Act to grant permanent authority to Health and Human Services to implement an eviction moratorium to address public health crises.

The Supreme Court’s conservative majority at the end of August allowed evictions to resume across the United States, blocking the Biden administration from enforcing a temporary ban that was put in place because of the coronavirus pandemic.

“This pandemic isn’t over, and we have to do everything we can to protect renters from the harm and trauma of needless eviction, which upends the lives of those struggling to get back on their feet,” Warren said in a statement. “Pushing hundreds of thousands of people out of their homes will only exacerbate this public health crisis, and cause economic harm to families, their communities, and our overall recovery.”

Bush, who pressured Biden to extend the moratorium until the end of August and was once evicted herself, said the delta variant-fueled surge makes a moratorium critical.

“As the delta variant continues to force individuals to quarantine, close schools, and stifle businesses, we must do all we can to save lives. That starts with keeping every person safely housed,” she said. Three dozen other lawmakers supported the bill.

Eviction filings have begun to tick up since the moratorium was lifted but most advocates said a surge in actual evictions is still weeks away. Nearly 3.7 million people in the U.S. as of Aug. 30 said they face eviction in the next two months, according to the U.S. Census Bureau’s Household Pulse Survey. That is slightly higher than the numbers early in August.

Many tenants at risk of eviction are counting on emergency rental relief to keep them housed. But that money has been slow to reach them so pressure has increased to reimpose a moratorium.

The Treasury Department said last month that just over $5.1 billion of the estimated $46.5 billion in federal rental assistance — only 11% — has been distributed by states and localities through July. This includes some $3 billion handed out by the end of June and another $1.5 billion by May 31.

The prospects for the bill remain unclear but housing advocates said a moratorium was the best way to ensure more people are forced from their homes.

“The federal eviction moratorium was a lifeline for millions of renters, and the last federal protection keeping many of them stably housed as they wait for emergency rental assistance to reach them,” said Diane Yentel, CEO of the National Low Income Housing Coalition. “Without the moratorium in place, families will be pushed deeper into poverty, communities will struggle with increased spread of COVID-19, and our country will have a harder time containing the virus.”

Landlords, who have long opposed the moratorium, said it would only saddle renters with debt they can’t pay.

“Instead of responsibly addressing the crisis at hand, moratoriums leave renters strapped with insurmountable debt and housing providers left to unfairly hold the bag,” said Greg Brown, a senior vice president for government affairs at the National Apartment Association. “Ultimately, any effort to pursue additional moratoriums will only balloon the nation’s rental debt … and exacerbate the housing affordability crisis, permanently jeopardizing the availability of safe and affordable housing.”