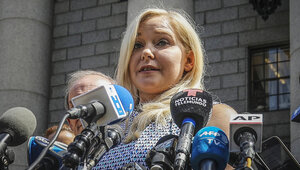 NEW YORK (AP) — A tentative settlement has been reached in a l awsuit accusing Prince Andrew of sexually abusing Virginia Giuffre when she was 17 years old in which the prince will make a substantial donation to the charity of his accuser and says he never intended to malign her character, according to a court filing Tuesday.

Attorney David Boies, who represents Giuffre, said in a filing in Manhattan federal court that lawyers on both sides were informing the judge that a settlement in principle has been reached and they’ll request a dismissal of the lawsuit within a month.

Meanwhile, the letter said, the judge should suspend all deadlines and hold the action in abeyance.

Giuffre sued Andrew in August. The American accused the British royal of sexually abusing her when she was 17 while she traveled with financier Jeffrey Epstein.

Andrew has strenuously denied Giuffre’s allegations and attempted to get the lawsuit tossed.

Attached to the letter by Boies was a statement that read: “Virginia Giuffre and Prince Andrew have reached an out of court settlement. The parties will file a stipulated dismissal upon Ms. Giuffre’s receipt of the settlement (the sum of which is not being disclosed).

“It is known that Jeffrey Epstein trafficked countless young girls over many years. Prince Andrew regrets his association with Epstein, and commends the bravery of Ms. Giuffre and other survivors in standing up for themselves and others.

“He pledges to demonstrate his regret for his association with Epstein by supporting the fight against the evils of sex trafficking, and by supporting its victims,” the statement read.