LEADING OFF: Altuve, shaky Astros in 2-0 hole vs Rays 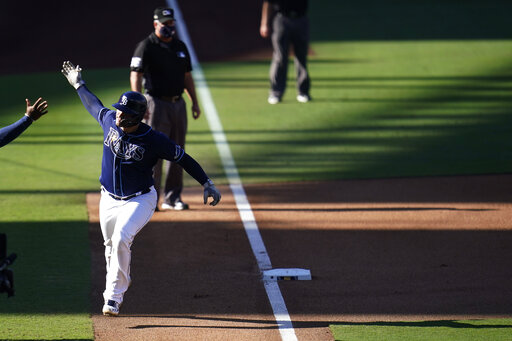 Jose Altuve and the Houston Astros face a 2-0 hole against Tampa Bay in the AL Championship Series and have hardly looked like a club that’s won two of the past three AL pennants. Altuve made two throwing errors from second base during a 4-2 defeat in Game 2, including a short-hop toss that preceded a three-run homer by Manuel Margot.

After the second error — both from shallow right field as part of infield shifts — Altuve and shortstop Carlos Correa began to swap positions in the formation.

“You just hope he isn’t getting the yips, because invariably they come in bunches,” said manager Dusty Baker, who gave Altuve a hug in the dugout after the second error. “Everything comes in bunches. I just told him to flush it. This guy has been awesome for us. You’ve got to flush it and move on, or else it multiplies. I’m sure he’ll do that.”

The Astros have also had a lousy go with runners on base. They’re 3 for 16 in the series with men in scoring position, including Alex Bregman’s bases-loaded strikeout at the end of Game 2.

Of course, Rays pitchers have something to do with that. Tampa Bay relievers have stranded each of the first 17 runners they’ve inherited in these playoffs, matching the 2006 Cardinals for the longest such streak to start a postseason, according to MLB.com.

Rays left-hander Ryan Yarbrough will start Game 3, giving towering righty Tyler Glasnow an extra day to recover after he pitched on two days’ rest in Game 5 of the AL Division Series against the Yankees. Houston will turn to right-hander Jose Urquidy.

THE KID AND THE ACE

Off to an impressive start in his first postseason, rookie Ian Anderson tries to give Atlanta a 2-0 lead in the NL Championship Series when he faces Dodgers star Clayton Kershaw.

After making only six regular-season starts, the 22-year-old Anderson has won both his playoff games, permitting just five hits while striking out 17 in 11 2/3 scoreless innings. Kershaw has produced mixed results in October throughout his illustrious career, but the three-time Cy Young Award winner is 2-0 with a 1.93 ERA in two playoff starts this year — including a 13-strikeout gem in the first-round clincher against Milwaukee. He is 11-11 with a 4.23 ERA all-time in the postseason.

The Braves won the series opener 5-1 with a four-run ninth that included a tiebreaking homer from Austin Riley and a two-run shot by Ozzie Albies.

30 mins ago
Connect With Us Listen To Us On