Leavine Family Racing to close at end of 2020 season 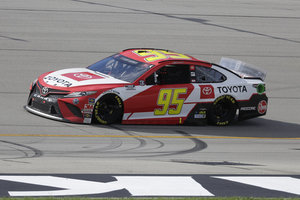 FILE - In this July 12, 2020, file photo, Christopher Bell (95) drives during a NASCAR Cup Series auto race in Sparta, Ky. Leavine Family Racing, which owns the Cup car driven by Christopher Bell, announced Tuesday, Aug. 4, 2020, it had sold its charter and will exit NASCAR at the end of the season. (AP Photo/Mark Humphrey, File)

CHARLOTTE, N.C. (AP) — Leavine Family Racing has sold its NASCAR team but will finish the season with driver Christopher Bell.

Team owner Bob Leavine made the announcement Tuesday, saying he could not risk his 41-year-old construction business by continuing to fund the team.

Leavine is the second team owner to close its doors after aligning with Joe Gibbs Racing. Furniture Row Racing won a championship with driver Martin Truex Jr. in partnership with Gibbs.

But when Gibbs raised the price and Furniture Row lost a critical sponsor, owner Barney Visser pulled the plug and closed the team. Truex moved to a Gibbs car and Leavine signed on as a Gibbs partner.

The partnership provided a landing spot for Bell, a JGR development driver who needed a promotion to the Cup Series but couldn’t get into one of Gibbs’ four seats. Bell, a rookie, has just one top-five finish this season and is ranked 23rd in the standings driving the No. 95 Toyota.

Leavine has not revealed who purchased the charter, which guarantees entry into the 40-car field each race.

“We will say goodbye at the conclusion of the 2020 NASCAR Cup Series season,” Leavine said. “This decision has not been made lightly. Family has always been a part of the team’s name and this is how we view every member of our race team — as our family.

“There is no good time to make this announcement, but doing it earlier allows our people to explore employment opportunities, for next season, to provide for their families. There will be opportunities with the new owners which was important to our decision.”

Leavine said 2020 has been a difficult year and “the pandemic has impacted our economy, and unfortunately that’s just not something we are able to overcome in order to continue racing beyond this season.”

He said the chassis and equipment that came from its alliance with Gibbs will return to JGR at the end of the season and are not part of the sale.

Leavine Family Racing has competed in NASCAR since 2011, making its debut with David Starr at Texas Motor Speedway. The organization didn’t run a full schedule until 2016, with Michael McDowell and Ty Dillon splitting the ride.

Others who have driven for the team include Kasey Kahne, Regan Smith, Matt DiBenedetto and Bell.