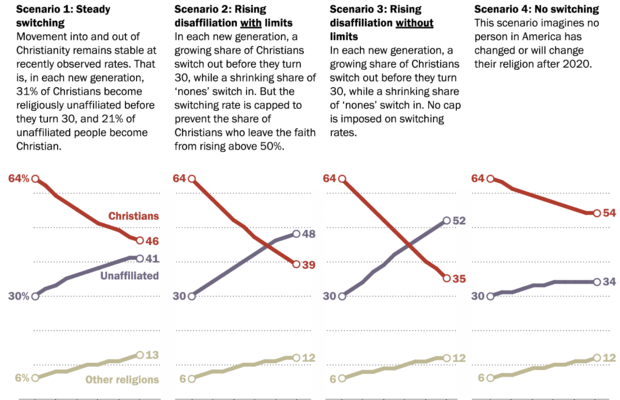 ▶ Watch Video: CBS Reports | The Right’s Fight to Make America a Christian Nation
Christianity has remained at the forefront of the nation’s political and social conversations for centuries — but new research shows that could be changing.

A new report by Pew Research Center and the General Social Survey published on Tuesday found that the large numbers of people in the U.S who practice Christianity are declining. The religion’s demographic has been dwindling since the 1990s, the report said, as many adults transition to an identity of atheist, agnostic or “nothing in particular.”

In the early ’90s, about 90% of people in the U.S. identified as Christians, the report said. In 2020, Christians accounted for about 64% of the U.S. population, including children. Meanwhile, those who are not affiliated with a religion has grown from 16% in 2007 to 30% in 2020, according to the research. All other religions, including Judaism, Islam, Hinduism and Buddhism, accounted for about 6% in 2020.

Pew and GSS paired up to analyze how those numbers could change if the Christian decline accelerates or stops, and how other demographic trends, including migration and rates of birth and death, would influence the outcomes. The researchers only looked at religious identity, rather than religious beliefs and practices.

“Depending on the future of religious switching, people who identify as atheist, agnostic or ‘nothing in particular’ could become America’s largest (non)religious group within our lifetime,” Pew researcher Stephanie Kramer tweeted.

In all of the scenarios, even if nobody switches their religious affiliation in the coming decades, the number of religiously unaffiliated people is hypothesized to approach or exceed the number of Christians by 2070, the report found.

None of the models considers Christianity numbers increasing, researchers said, as they are based on “dynamics currently shaping the religious landscape.” Dramatic events, such as armed conflicts, social movements, or rising authoritarianism could trigger social and religious upheavals, they added.

A scenario of steady switching – which would mostly happen among young people between the ages of 15 and 29 – could result in Christians losing their majority ranking in 2070, although the demographic would still be the largest U.S. religious group.

“If switching among young Americans continued at recent rates, Christians would decline as a share of the population by a few percentage points per decade, dipping below 50% by 2060,” the report says.

If leaving Christianity becomes more popular, but no more than 50% of the demographic leaves the institution, the religion would again lose its rank as the majority – and as the largest group – at 39%. Instead, those who who do not identify with a religion would become the largest religious group, accounting for 48% of those in the U.S.

The report found that if the number of Christians disaffiliate by the time they turn 30 rises with every generation, and there is no limit imposed to how many people would leave, Christianity would lose its majority status by 2045 – in 23 years. In 2070, 52% of people in the U.S. would have no religious affiliation, while just 35% would be Christian under this scenario.

There’s only one scenario in which Christians would retain their religious majority through 2070 – one in which no person changes their religion after 2020.

“But even in that hypothetical situation, the religious makeup of the U.S. population would continue to shift gradually,” the report says, “primarily as a result of Christians being older than other groups, on average, and the unaffiliated being younger, with a larger share of their population of childbearing age.”

If that happens, Christianity would decline by 10% by 2070. But as Pew noted, this situation “is not realistic.”

“Switching has not ended and there is no reason to think it will come to an abrupt stop,” researchers said. “…Still, if fewer future young adults switch from Christianity to no affiliation, or if movement in the opposite direction increases, the future religious landscape might resemble the results of this projection.”

The most likely scenario to occur, if recent generational trends continue, researchers said, is No. 2 – when Christianity declines but at a cap of no more than 50% leaving.