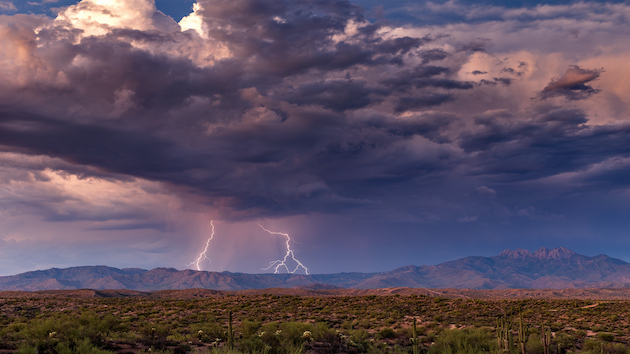 (LOS ANGELES) — Dry lightning is posing the threat for new fires to spark in a region already plagued by dozens of largely uncontained wildfires.

The thunderstorms could generate after moisture as the deadly monsoons in the Southwest U.S. push north to areas such as southern Oregon, where the Bootleg Fire rages on, and northern California and Nevada. Officials are concerned that the lightning strikes could generate new fires as firefighters are struggling to contain the existing blazes.

There are currently at least 89 large wildfires burning in the U.S., most of them in the West.

The Dixie Fire near the Feather River Canyon in Northern California had grown to nearly 193,000 acres by Monday morning and was 21% contained. Over the weekend, the Dixie Fire surpassed the Beckwourth Complex Fire in Doyle, California, as the state’s largest wildfire.

More than 8,300 people in Northern California are currently under evacuation orders, according to the California Governor’s Office of Emergency Services.

The Bootleg Fire in southern Oregon, currently the largest in the country and the third-largest in state history, had burned through nearly 410,000 acres and was 53% contained by Monday.

The Tamarack Fire near Gardnerville, Nevada, had scorched more than 67,000 acres by Monday and was 45% contained.

The monsoon strikes expected to generate dry lightning began over the weekend, killing at least seven in Utah after a sandstorm triggered by the monsoons caused a series of car crashes.

In Arizona, a 16-year-old is missing as a result of flash flooding. The teen had called 911 to ask for help after her car was stranded in floodwater, but as first responders attempted to rescue her, she was swept from her car and washed away, officials said. Phoenix is having its wettest month on more than two years as a result of the storms

Flash flooding is expected Monday in Southern California and parts of Nevada as the monsoon storms continue.