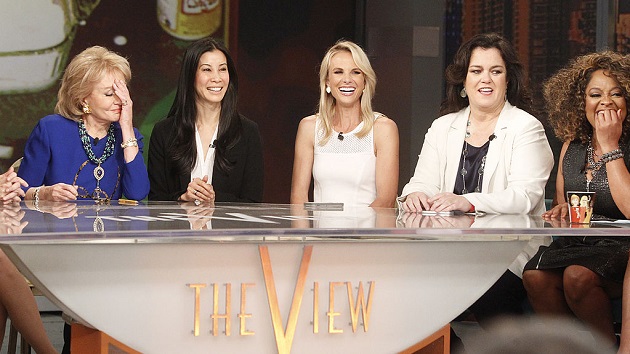 (NEW YORK) — On the latest episode of the “Behind The Table” podcast, former co-host of “The View” Lisa Ling and current co-host Sara Haines spoke candidly about their biggest regrets while co-hosting the show and how they learned to speak openly at the Hot Topics table.

On the podcast, Haines said she is a “huge fan” of Ling and always admired her time on the Emmy award-winning daytime talk show and as a “hardcore” journalist.

Ling’s career began at age 21, when she covered the civil war in Afghanistan as a correspondent on Channel One News. In 1999, at 26, she became a co-host of “The View” and got to work alongside show creator Barbara Walters, Joy Behar, Meredith Vieira and Star Jones. She was one of the youngest co-hosts on the show.

In December of 2002, Ling decided to leave the show to further pursue her journalism career as a correspondent for National Geographic’s Explorer. She went on to become an award-winning journalist reporting hard-hitting stories from numerous countries.

“What you do is emotional at times, but you just are so immersive and the stories you tell are so powerful,” Haines said of Ling’s impressive journalism career.

Ling sat at the Hot Topics table for three years before becoming a field correspondent at “The Oprah Winfrey Show” and pursuing her journalism career.

Though Ling called “The View” a “tangent” in her career, she said being on that table is how she found her voice, and her time there was “instrumental in helping me to get to where I am today.”

But that’s not to say she hasn’t had to grapple with some regretful remarks she made on the show.

One evening in December 2001, Ling bumped into Monica Lewinsky, who had a relationship with former President Bill Clinton during her time as a White House intern working in the office of the chief of staff, Leon Panetta. The two spoke about Lewinsky’s college tour, and Ling said that she told her about how disappointed she was that the questions being asked of her weren’t more intellectual.

On Dec. 19, 2001, one of “The View” co-hosts asked Ling about her night. She told viewers about her conversation with Lewinsky and commented that she doesn’t know what’s intellectual about being on your knees.

“My heart sunk,” Ling told Haines. “It was so not me to say something like that about someone who had kind of confided in me about something personal that she had experienced.”

“I felt deflated and sad and hurt,” she continued. “It was, it was a horrible, horrible moment where I sacrificed my own character right for that laugh.”

Ling said that soon after her comment, she “profusely apologized” to Lewinsky and years later had the opportunity to interact with her even more. While she said Lewinsky was “gracious and forgiving,” she also “wasn’t afraid” to tell her how hurt she was by Ling’s comment.

Haines related to Ling’s story and looked back on comments she made about Taylor Swift after her “Reputation” album was released in 2017.

After she watched Swift’s “Miss Americana” documentary, Haines said she “recognized” that she was a part of “a media problem” with Swift and was upset by the realization.

“I had made jokes before about how many boyfriends she’d had or writing a song about them,” Haines said. “They actually were all innocently motivated. I wasn’t going for a laugh.”

Now, Haines said she realized she was a part of the conversations that hurt Swift.

“I private messaged her on Instagram and kind of communicated what I had done, what I saw in the documentary and that I hoped I was a part of the stronger narrative from that point on in defending what someone might feel like in those moments.” Haines said it was “no surprise” that she didn’t hear back from Swift, but she “needed to let her know that I was sorry.”

Prior to making regrettable comments on “The View,” Ling told Haines that she had to overcome the Asian etiquettes she learned growing up.

Sitting alongside Walters, Behar, Vieira and Jones,” Ling felt it was “mortifying” to speak up “because culturally, I would always wait until they said their piece and then I would offer my thoughts or my insights.”

While Ling said it felt like a “fight every day just to express an opinion,” she wouldn’t be able to do what she can now had it not been fro those three years at “The View.”

In the third episode of “Behind The Table,” Ling and Haines discuss the challenges they faced on the show, fond memories of Barbara Walters. Ling also looks back on her decision to leave “The View” and Haines reflects on her early days guest co-hosting the show and her decision to come back on the panel after leaving in 2018.

“‘The View’ has become a real force. It’s an important outlet and it’s smart. It can be irreverent. It can be silly. It can be funny,” Ling told Haines on the podcast. “It is comprised of smart women expressing their feelings and their opinions about things that are happening in this country and in the world.”