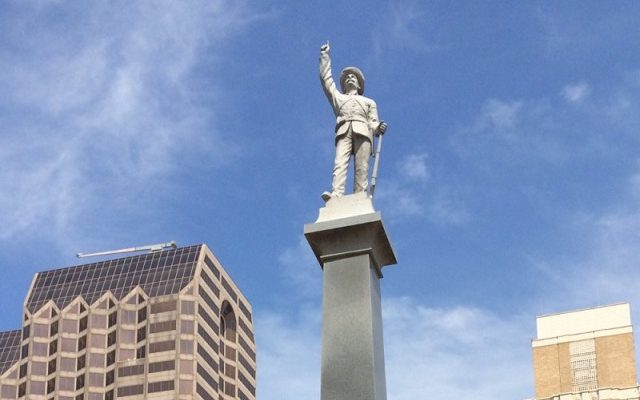 SAN ANTONIO (KTSA News) – They’ve seen the Confederate monument since it was removed from Travis Park, but they say they can’t tell us where it is because the case is in litigation.

Robin Terrazas, President of the local chapter of the United Daughters of the Confederacy, and member Rita Schimpff told the KTSA Morning News with Trey Ware that the statue was damaged in the move.

“They used expansion bolts, which were unnecessary, to basically drill into the monument and created damage there,” said Schimpff.

Terrazas noted that photos of the removal process show city workers using jack hammers and pickaxes to remove the base.  She says the time capsule also was damaged by water.

“We have actually opened up the time capsule,” said Terrazas. “Most of that was damaged, but there were a few pieces that were saved.”

Ware asked where they saw the statue, but neither Terrazas or Schimpff gave a hint. They would only say it’s being kept at an undisclosed location until a decision is made on a permanent home. City officials want to put the Confederate soldier statue in a museum, but the UDC wants it back at Travis Park.

The Albert Sidney Johnston 2060 Chapter of the UDC has filed a federal lawsuit against the City of San Antonio and 10 Council Members. They argue that the organization’s 5th and 14th amendment rights were violated when the City removed the statue from Travis Park under the cloak of darkness on a September night in 2017 just hours after the San Antonio City Council voted 10 to 1 to move it.

“The City did towards the end of last year decide that they were ready to return our property to us, but they wanted to do it as a donation agreement and we couldn’t accept that wording,” said Schimpff. “How do you donate something to someone who already owns it?”

Schimpff says they were pretty close to reaching an agreement, “but then they wanted to tell us what we could and could not do with our own private property.”

The statue of the Confederate soldier pointing toward the sky had been at Travis Park for more than a 100 years.