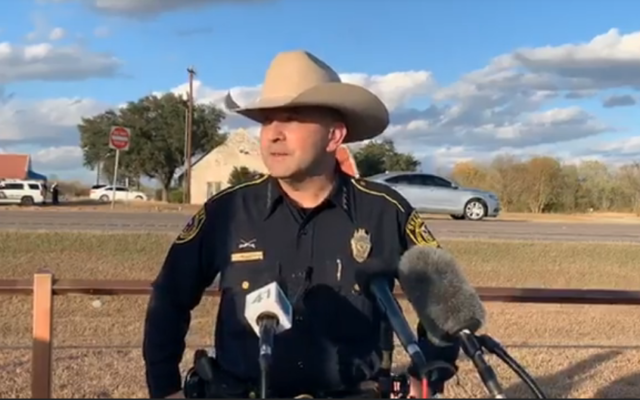 BEXAR COUNTY (KTSA News) — A Bexar County sheriff’s deputy and a suspect were injured during a lengthy police chase on U.S. 87 between China Grove and Sutherland Springs Tuesday.

The chase began in China Grove when a China Grove Police Department officer attempted to pull over a car on U.S. 87.  The driver refused.

The driver turned around near Sutherland Springs and went back into Bexar County.

The Bexar County Sheriff’s Office had spike strips set up at the county line, but that attempt was unsuccessful.  Deputies tried it again further into the county with success, deflating at least one tire.

The car came to a stop and a deputy got out of his patrol vehicle to command the driver to stop.

The driver declined and drove the car toward the deputy, striking him.  The deputy fired his service weapon at the suspect, striking him at least once.

Salazar said the driver drove a bit further into the county and either had a mechanical issue or surrendered.

The sheriff said the deputy’s injury was non-life threatening in nature and was taken to an area hospital.  Salazar described the injury as being initially minor.

The driver was taken to SAMMC in critical condition.

The driver and his female passenger both had heroin on them.  Both will be facing charges.

Salazar said a long stretch of U.S. 87 will be closed for a while as deputies continue to investigate.  The Bexar County District Attorney’s Office is also on the scene to investigate.