Longhorn Band will be required to play ‘The Eyes of Texas’ 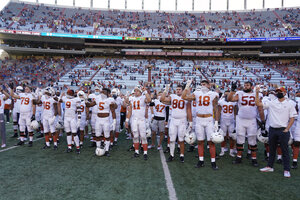 FILE - In this Saturday, Oct. 24, 2020, file photo, Texas players, including Sam Ehlinger (11), sing "The Eyes Of Texas" after an NCAA college football game against Baylor in Austin, Texas. The University of Texas marching band and pep band will be required to play “The Eyes of Texas” school song when they return to performing, but the school will also create a new band that doesn't include it in its play list, the school has announced. The song has been mired in controversy since summer 2020 when a group of athletes and students called on the school to ditch the tune amid national racial injustice protests after the killing of George Floyd. (AP Photo/Chuck Burton, File)

AUSTIN, Texas (AP) — The University of Texas has announced that its traditional marching and pep bands will be required to play “The Eyes of Texas” when they return to performing, but a new band will also be created that won’t play the school song with racist elements in its past.

The move was sharply criticized by the state chapter of the NAACP and it comes nearly two months after school President Jay Hartzell said no student or athlete would be required to sing the song that has been mired in controversy. A group of Texas athletes and students last summer called for the song to be dropped amid racial injustice protests after the killing of George Floyd.

Hartzell, with the full backing of the school’s Board of Regents, said the song would stay, and a university report released in early March concluded there was “no racist intent” behind the song, whose roots are in early 1900s minstrel shows with musicians often in blackface

When the report was released, Hartzell said no one would be required to participate in the song, which has long been a popular fixture at campus events, most notably at football games and other sports events.

The announcement posted Wednesday on the school of music’s web page said the traditional Longhorn Band and pep band will be required to perform a repertoire of songs that include “The Eyes of Texas.” Both the marching band and pep band earn academic credits toward graduation.

The school is also creating a “to be named” university band for students for fall 2022 that will not play the alma mater or school fight song. That band will also earn academic credit, but the school did not say where or when it will perform. It will be designed “with a focus on leading/directing bands and community engagement,” the school said.

“We need to celebrate and nurture what makes UT special, and the Longhorn Band is one of those great organizations that shape our campus culture, elevate school spirit and provide amazing opportunities for our students,” Hartzell said.

Gary Bledsoe, president of the Texas chapter of the NAACP and a Texas law school graduate, sharply criticized the decisions to keep playing the song and create a separate band. He said that will set up the traditional Longhorn Band as a “privileged group.”

“People who exercise their constitutional right to not participate in a racist song, and are therefore denied an opportunity to play in a special band, that’s just going to be an issue that’s going to have a disparate impact on African-American band members,” he said. “It’s like telling folks you have to engage in a racist activity and if you don’t, you can’t be in the band.”

Written in 1903 and sung to the tune of “I’ve Been Working on the Railroad,” “The Eyes of Texas” is an old standard in Longhorns country. For decades, it has been sung after games and graduation ceremonies, and is a popular sing-along at weddings and even funerals

It has also been a sore subject for decades for some minority students. The title was taken from a favored saying of a former school president who had reportedly mimicked remarks by Confederate Gen. Robert E. Lee.

In March, the NAACP joined a group of Black state lawmakers and students in criticizing the school report’s and said they would keep pressing the university to drop it.