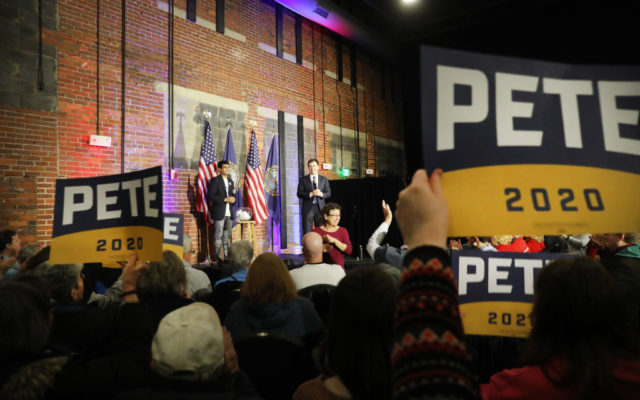 MANCHESTER, NEW HAMPSHIRE - FEBRUARY 04: Democratic presidential hopeful Pete Buttigieg greets supporters in Manchester, New Hampshire the morning after the flawed Iowa caucus on on February 04, 2020 in Manchester, New Hampshire. Despite a botched election caucus process that has delayed the release of the state’s results, Buttigieg has declared he had a strong showing in the results. (Photo by Spencer Platt/Getty Images)

When I was starting out in life, radio and college, I wanted all the experience (and pay) I could fit into a 24 hour day. So, the first several years were overlapping gigs at different radio stations, between and around college classes.

I sometimes think the second radio job of your career might be the key one (because so many non-broadcasters tell me they “once” worked at a radio station. So maybe the second job is when the thing takes).

My second was an offer in 1985 to work Saturday afternoons at WJYY-FM Concord, NH, which was a very, very soft-rock station (“Joyyyy 105-point-five” we would say between Carpenters and Streisand records, in the hushed tone of putting a baby down for a nap).

A man named Glenn Hollis, the assistant program director, hired me. Not sure why. I was green, my tapes sounded like a wannabe rock jock, and surely there was someone closer than the 75-mile drive I’d be making for a five-hour on-air shift. But he did hire me, coach me, and welcome me to one of the friendliest places I’ve ever been.

I’d always lived, worked and gone to school within a limited area. Now, at 19, my old Chevy Malibu and I were hitting the road.

Concord is the capital of New Hampshire, but the population, at the time, was about 30,000. About the size of Cibolo. People tended to stay in or around the town they grew up in, towns like Derry, Bow and Hooksett.

The encroachment of Massachusetts residents fleeing taxes and seeking lower home prices was just beginning. Sometimes people called them “Mass-holes”, which some of them certainly were.

But even though I had a Mass. license plate, just about every Granite Stater I met, in doughnut shops, gas stations and stores, couldn’t have been friendlier.

A major activity on weekends (when I was up there) was the bean suppers to support local churches or volunteer fire departments. For a very low plate-price, you enjoyed heaping helpings of home-cooked ham, turkey, chili, soup, beans and cakes or pies.

All were welcome. No one who came a stranger left one.

That’s the New Hampshire you should know, as the state takes its  quadrennial turn in the political spotlight.

Who’s to say if New Hampshire should be the first primary state?

But if you ask me if the people of New Hampshire are representative of the kind of people who make up America, I’d just say one thing.

We better hope so.