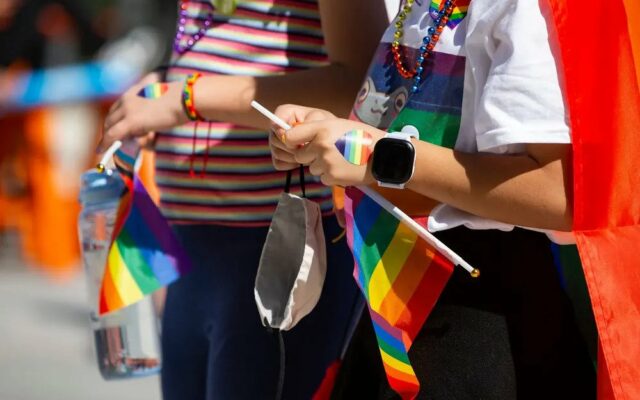 That state’s controversial law prohibits classroom lessons on sexual orientation or gender identity for kids below the fourth grade or any instruction that is not “age-appropriate or developmentally appropriate” for older students. It has come under heavy scrutiny as opponents of the bill say it will harm LGBTQ children.

While Texas’ next legislative session doesn’t start until January, the issue will be addressed in Education Committee hearings before then, Patrick said in a campaign email.

“I will make this law a top priority in the next session,” he said.

Patrick’s office did not immediately respond to a request late Monday.

Enforcing Florida’s law falls to parents, much like Texas’ restrictive abortion law, Senate Bill 8, which empowers private citizens to sue anyone who “aids or abets” an abortion after about six weeks of pregnancy.

A parent can sue a school district for damages if they believe it has broken the law. If they win, parents will receive money and recoup attorney fees. In Florida, the law’s supporters portrayed it as a way to give more rights to parents. Gov. Greg Abbott has similarly said parents should have more rights concerning their children’s education as he campaigns for a third term.

Val Benavidez, executive director of the Texas Freedom Network, said in a statement to The Texas Tribune that Patrick’s promise to bring similar legislation to the state is a “stain on Texas.”

“Gender expression by children is not something that is scary or harmful. What is scary is that political activists are grasping at power by overstepping into the lives of Texas families and education of students,” Benavidez said. “While politicians use hate speech that is far from center to harm our vulnerable youth, we will continue to love our children and make sure that all families are uplifted in public life.”

Critics say that the Florida measure’s intent is to stifle and marginalize LGBTQ people and their families. A lawsuit filed by LGBTQ groups in Florida seeks to strike down the law there. The lawsuit alleges that the law violates the constitutional rights of free speech, equal protection and due process of students and families, according to NPR.

Florida’s law also requires school districts to notify parents about health services offered at the school and the option to decline such services. Schools must also inform parents of any health-related questionnaires or health screening forms that may be given to any kindergarten through third grade student.

Patrick’s announcement comes on the heels of a Republican-led spree to limit what can be taught in schools about race and American history, restrict what books about race and sexuality appear on library shelves and criminalize gender-affirming health care for transgender children, even treatment medical experts support.

Texas Republicans are following a national playbook of feeding off conservative parents’ fears that “critical race theory” is being taught in public schools and children are being exposed to obscene sexual content.

Critical race theory is the study of how race has influenced not only human behavior but shaped laws and policies, and educators say it is not taught in Texas’ public schools as it is mostly a university-level subject. The GOP often misapplies the term to any discussion about race.

Legislation like Texas’ so-called critical race theory law and investigations into books about race and sexuality have put added pressure on teachers already feeling burnout caused by the pandemic.

Texas’ teacher shortage has increased so much that Abbott called for the creation of a taskforce that will look to fix the issue. But education advocates say that the state’s own laws are driving teachers out of the profession and scaring away potential teachers.

Patrick vowed to prioritize Texas legislation limiting lessons about LGBTQ people in a campaign email Monday with the subject “I AM DONE WITH DISNEY!” Patrick denounced The Walt Disney Company for publicly promising to help repeal the controversial Florida law. After Florida Gov. Ron DeSantis signed the bill into law last week, Disney published a statement saying the law should have never passed and that the company would support organizations fighting to have it repealed, according to a Variety article about the company’s stance.

Disney’s statement comes after employee backlash and a walkout in response to Disney CEO Bob Chapek’s initially soft public stance on the bill, according to NPR. These employees called for Chapek to better advocate for LGBTQ people by publicly condemning the bill, refusing funding from lawmakers who support anti-LGBTQ legislation and donating to organizations fighting for LGBTQ rights and causes, according to the employees’ walkout website.

One recording shows a Disney employee discussing adding more queer characters into company productions, according to National Review. Another shows an employee discussing the removal of gendered terms when greeting guests at Disney parks, according to FOX News. For example, instead of saying,“Hello, ladies and gentlemen, boys and girls,” the park employees may use “Hello, friends” or “dreamers of all ages.”

In his email, Patrick calls for parents to boycott Disney and stop their children from interacting with Disney products, lest the company “indoctrinate the children of America with their radical ‘woke’ views.” He also said he sold his personal Disney stock and encouraged his supporters to do the same.

Disclosure: Texas Freedom Network has been a financial supporter of The Texas Tribune, a nonprofit, nonpartisan news organization that is funded in part by donations from members, foundations and corporate sponsors. Financial supporters play no role in the Tribune’s journalism. Find a complete list of them here.

We can’t wait to welcome you in person and online to the 2022 Texas Tribune Festival, our multiday celebration of big, bold ideas about politics, public policy and the day’s news — all taking place just steps away from the Texas Capitol from Sept. 22-24. When tickets go on sale in May, Tribune members will save big. Donate to join or renew today.