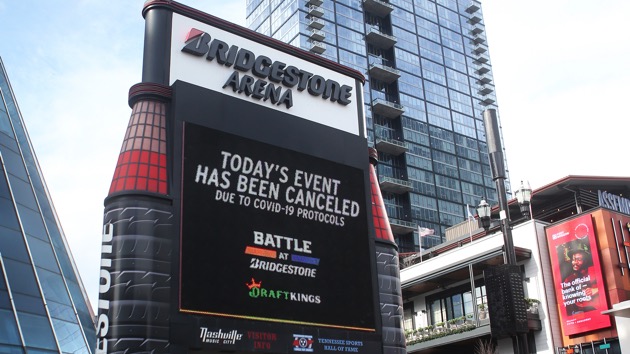 (NEW YORK) — With a rise in COVID-19 cases across the nation alongside spread of the new omicron variant, several major events this week have been rescheduled or canceled.

New York and Washington, D.C., on Friday and Wednesday, respectively, reported the most COVID-19 cases in a single day, breaking their pandemic records.

The NBA announced Sunday it has postponed five upcoming games “because of players and staff members entering the NBA’s health and safety protocols.”

The NFL on Friday rescheduled three games, including moving Saturday’s contest between the Cleveland Browns and the Las Vegas Raiders to Monday at 5 p.m. ET.

All members of the organization who recently tested positive were vaccinated, according to a statement from Cleveland Browns Senior Vice President of Communications Peter John-Baptiste.

Sunday’s games between the Washington Football Team and Philadelphia Eagles and between the Los Angeles Rams and Seattle Seahawks were postponed to Tuesday.

In a statement, the NFL said they made these schedule changes “based on medical advice” after “seeing a new, highly transmissible form of the virus.”

This trend is observable in other sports as well, as the NHL earlier announced it was rescheduling all games for the Colorado Avalanche and Florida Panthers through at least the Christmas weekend amid a COVID-19 outbreak.

The organization pointed to rising positive cases within the last two days and the continued spread of COVID-19 as a concern.

The Calgary Flames, which has already had six games postponed, will now not play through Dec. 23.

On Saturday, the NHL also announced that the Boston Bruins’ and Nashville Predators’ games will be postponed through at least Dec. 26 due to rising COVID-19 cases. The move impacts four Bruins games and three Predators games.

Additionally, Saturday night’s Toronto-Vancouver game and Sunday’s Arizona-Vancouver and Toronto-Seattle games have been postponed after “a number” of Toronto and Vancouver players entered COVID-19 protocols over the past two days, the league said.

On Sunday, the NHL announced that all games between U.S. and Canadian teams scheduled for Dec. 20 to Dec. 23 will be postponed and rescheduled.

Several college basketball games this weekend were also canceled, including No. 18 Tennessee vs. Memphis, Iona vs. No. 16 Seton Hall, No. 4 UCLA vs. North Carolina, No. 23 Colorado State vs. Tulsa and No. 15 Ohio State vs. No. 21 Kentucky. No. 2 Duke actually had two games canceled after it tried to schedule matchups against Cleveland State and then Loyola (Maryland), but each fell through due to virus concerns. Seton Hall, enjoying one of its best seasons in decades, has already forfeited its conference opener against rival St. John’s on Monday as well due to a shortage of healthy players.