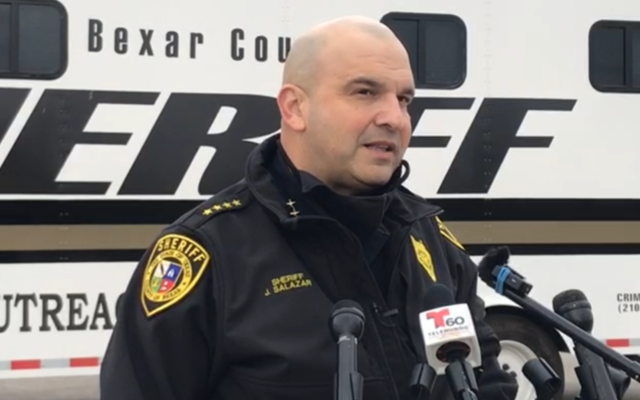 Bexar County Sheriff Javier Salazar said the two victims were in the area of Rubens and Whistler — near the intersection of Montgomery and Gibbs Sprawl Road — to meet for a deal to exchange misdemeanor amounts of marijuana.

Suspects approached with weapons and tried to rob the duo.  They ended up shooting into the vehicle.

Salazar said the two victims were 20-year-old Robert Smith and a 14-year-old boy.

The sheriff noted there has been an uptick in violent crimes within a one-mile radius of the office’s mobile command getup on the corner of Gibbs Sprawl Road and Walzem Road.

The sheriff’s office will again be increasing its presence in that part of the county.

Salazar stated that not only will there be more marked and unmarked sheriff’s office vehicles in the area, Texas Department of Public Safety, Kirby Police Department, and Converse Police Department resources will also begin increasing patrols in the unincorporated neighborhoods.

The sheriff also noted to reporters that in the past couple of years, the bulk of drug-related murders have been over misdemeanor amounts of marijuana — not high volume drug sales.