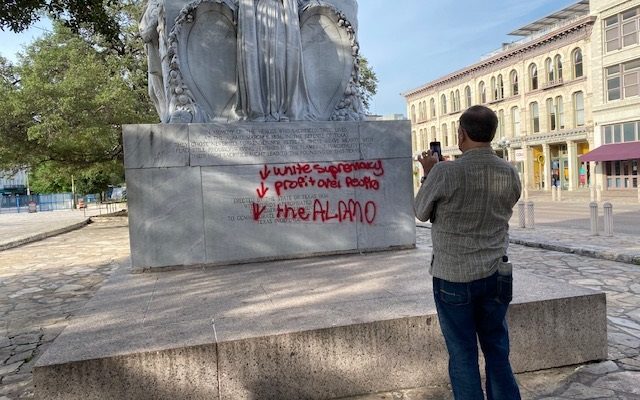 Officers were first called around 1 a.m. Friday when someone discovered the letters ACAB, an anti-police message, spray-painted in red on a sidewalk on the south end of Travis Park.

Then they discovered the Cenotaph at Alamo Plaza had been tagged with the messages, “Down with white supremacy, down with profit over people, and down with the Alamo.”  Downward arrows before each message indicate ‘down with.’

“I’m highly ticked off, “said Brandon Burkhart, President of This is Texas Freedom Force. “I mean, the  Alamo has absolutely nothing to do with race. We had Tejanos there, we had Hispanics fighting alongside Anglos.”

Burkhart told KTSA News he called Mayor Ron  Nirenberg’s office to demand that the individuals responsible for the graffiti be charged with more than vandalism.  He says the person or persons  responsible should be charged with a hate crime and desecration of a historic monument.

A man riding his bicycle at Alamo Plaza Friday morning stopped to take a picture of the graffiti on the Cenotaph.

“I think white supremacy is a problem, but this is not the way to oppose it,” he said.

Officials at the Alamo issued a statement:

“The Alamo joins with Texans in expressing our outrage that anyone would desecrate so historic a monument as the cenotaph in such an offensive manner. As we condemn this vandalism, we salute the San Antonio Police Department (SAPD) for its swift action to investigate. We have worked in close cooperation with the SAPD to provide them with any assistance we can, ” officials said.

“The Alamo is working in concert with the City of San Antonio to develop and implement a plan to repair the damage as quickly and safely as possible. At the request of city officials, Alamo Conservator Pam Rosser will oversee the careful removal of the paint. Removing red paint from marble requires technical expertise to prevent any damage to the historic structure,” read the statement.

Rodney Seiler, who says he’s a descendant of one of the Alamo defenders, showed up to see the damage after hearing about it on KTSA.  He was glad that his relative’s name, Isaac White, had not been damaged, but Seiler was infuriated over the graffiti on the marble base of the monument dating back to the 1930’s.

“My emotions run from sheer anger to profound sadness,” he said. “This just shouldn’t be.”

Ramon Garza, outreach director for This is Texas Freedom Force, called the graffiti tagging  “an act of cowardice.”  Garza said he was angry and disgusted Friday morning when he saw the spray-painted messages on the memorial honoring the Alamo defenders.

“When you get individuals that act like this, it just tells you there’s a lot of hate for our history, and that needs to stop ” said Garza.

Across the street from Alamo Plaza is a walkway with water fountains on one side and shops on the other.  It leads to the Hyatt Regency Hotel on Losoya street, which is  named after Alamo defender Jose Toribio Losoya.  A statue of Losoya on a horse and holding a gun faces a wall of the Hyatt Regency Parking garage where a worker was trying to wipe off  graffiti Friday. Taggers also spray painted letters on an exterior wall on one of the upper floors of the parking  garage.

San Antonio City Councilman Roberto Trevino, who represents the downtown area, said police patrols will be stepped up around the Cenotaph and other historical monuments downtown.  This is  Texas Freedom Force was planning to have their own overnight security at Alamo Plaza.

“We’ll have armed guards posted out here each and every night to protect the Cenotaph from any kind of nonsense,” said Burkhart.

By Friday afternoon, the graffiti at the Cenotaph had been covered up with white paper held up by blue tape along the borders.  Trevino said they have to be very careful about how they remove the paint from the marble because they don’t want to damage it.

“This is an important Texas historical monument,” said Trevino. “It’s an artifact on site at the Alamo.”

He said the Alamo conservator will inspect the damage Monday and come up with a plan for the careful removal of the red spray paint.

“One of the most important things we do here at the Alamo is to preserve and protect all of the historic artifacts, this being one of them,” said Trevino, who helped formulate the Alamo Master Plan.

In a statement sent to KTSA News, Mayor Nirenberg said,”I’m opposed to the lawless defacing and destruction of any public or private property.”