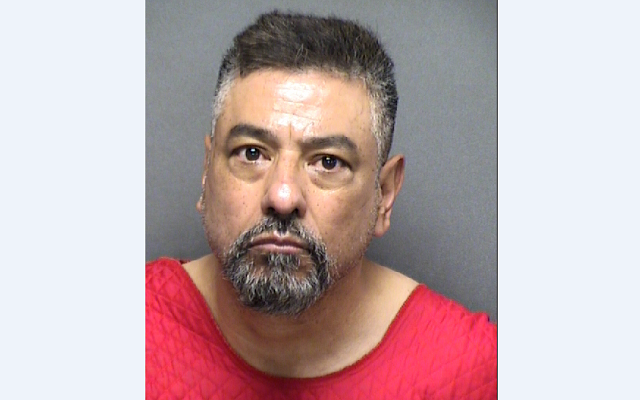 Salvador Gonzales, 55, arrested after allegedly holding Bexar County Sheriff's Deputies at bay and threatening them with an AR-15 rifle/Photo-BCSO

SAN ANTONIO (KTSA News) – A man armed with an AR-15 rifle has surrendered peacefully after threatening Bexar County Sheriff’s deputies and holding them at bay for several hours.

Deputies were called around 2 pm Sunday for a domestic dispute at a West Bexar County home on High Castle Dr.   The caller told the dispatcher that 55-year-old Salvador Gonzales was a military veteran who suffered from PTSD and he was armed with a rifle.  He was said to be driving a black Jeep SUV.

A deputy saw a vehicle matching the description parked at the entrance to the subdivision.   When he made his way to the vehicle, the suspect drove to the home on High Castle, got out and grabbed a black AR-15 rifle with an attached extended magazine.

The deputy says Gonzales started yelling racial slurs at him and said he “was ready to die.” According to the arrest affidavit, Gonzales pointed the rifle at the deputy while moving toward him.  He yelled that he was “going to die” and was “taking officers with him.”

Deputies surrounded the residence and evacuated nearby homes.

“A lot of this was brought on by, most likely, some PTSD symptoms,” said Bexar County Sheriff Javier Salazar.

He said some “family stressors” may have led to Sunday’s incident, and it’s  not the first time deputies have been called to that home. The sheriff says deputies dealt with the individual a couple of months ago.

“He was taken in for mental health evaluation at that point, but it appears that since that time, he has obtained a weapon, an AR-15 type rifle,” said Salazar.

Negotiators were able to talk the man into surrendering shortly after 6 pm.  Deputies are trying to determine how he managed to obtain the rifle.

Gonzales is charged with aggravated assault with a deadly weapon-public servant.