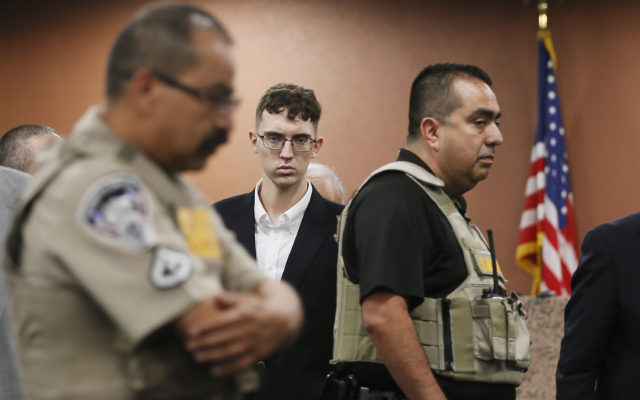 FILE - In the is Oct. 10, 2019 file photo, El Paso Walmart shooting suspect Patrick Crusius pleads not guilty during his arraignment in El Paso, Texas. The government has filed hate crime charges against Crusius, who said he was targeting Mexicans and shot to death 22 people at a Walmart store in El Paso, Texas, last summer, a person familiar with the matter told The Associated Press. (Briana Sanchez / El Paso Times via AP, Pool, File)

By CEDAR ATTANASIO Associated Press
Lawyers for the suspect in a shooting at a Walmart in Texas that killed 22 people have waived a federal bond hearing and the reading of the indictment. At Patrick Crusius’ appearance Wednesday, survivors of the attack teared up and consoled one another. Crusius is already being held without bond on state charges. His attorneys waived a reading of his 90-count federal indictment in which he was charged with federal hate crimes in the shooting. That attack which targeted Latinos in the border city of El Paso. He has also been charged with capital murder under Texas state law.