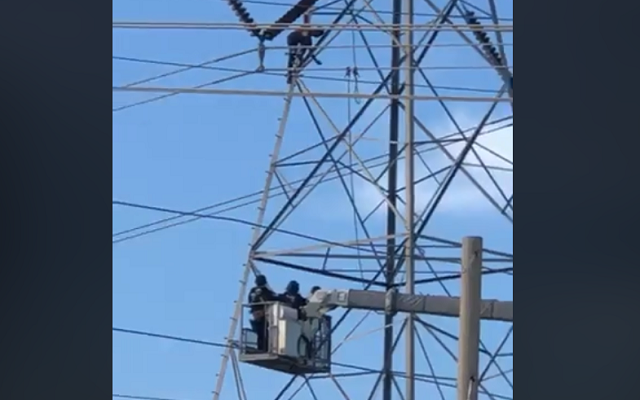 SAN ANTONIO (KTSA News) – A man brought traffic to a standstill when he climbed a transmission tower off of  Nacogdoches Road near Higgins Road Monday afternoon.  He was up there for about three hours as police and firefighters tried to rescue him.

Veronica Flores who lives nearby says it started earlier Monday afternoon when her grandmother called police to report that a man was hiding in some bushes and yelling.

“He was singing and then he would get angry and start yelling.  He kept singing and yelling, and it scared my grandmother,” said Flores.

When police arrived, the man, who was not wearing a shirt,  started climbing up the transmission tower and Flores caught the incident on Facebook Live.

“They called the fire department and they came with ladders and an ambulance, but the closer they got to him, the higher he went,” she said.   “The whole time he was up there he was  yelling at the cops and telling them off.”

She started to worry that the man may lose his grip and fall.

She says he went so far up the tower that the fire department ladders couldn’t reach him.  They also brought in a bucket truck.

She says after about three hours, the man decided to come down the tower on his own.

“At least he came down peacefully and he’s going to get the help he needs,” said Flores.