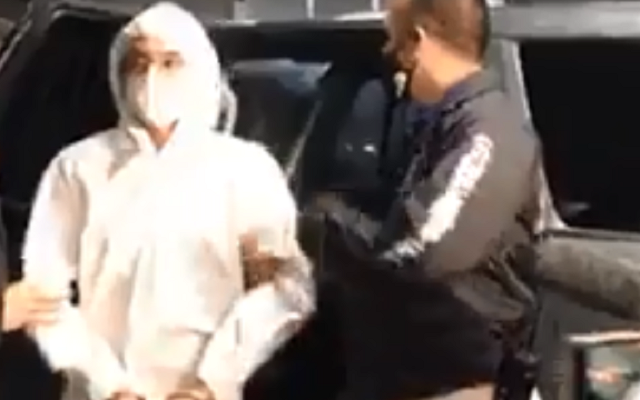 SAN ANTONIO (KTSA News) – A man connected to the shooting of a Balcones Heights officer Wednesday is in custody in Bexar County after being arrested  in Mexico.  Sijifredo Montemayor was taken into custody in Nuevo Laredo, Tamaulipas.

Bexar County Sheriff Javier Salazar was able to confirm Thursday night that Montemayor was in custody,  and Friday morning, the suspect agreed to return to Bexar County.

“It’s being termed a self-surrender.  He agreed to voluntarily  come back to the United States,”Salazar said.

Montemayor was brought to the border by Tamaulipas State Patrol and turned over to U.S. authorities. Now, he’s at the Bexar County Jail.

He emerged from an SUV Friday afternoon wearing a white haz mat suit, mask, leg irons and handcuffs.  Montemayor told reporters he’s praying for the officer who was wounded.

“A lot of people are sorry about their crime once they’re caught,” Salazar said.

Sijifredo was shot in the shoulder, but Salazar says it’s not known who shot him.  Because the bullet exited his shoulder, investigators have been unable to determine if he was shot by the Balcones Heights officer or accidentally wounded by his brother.

Bexar County Sheriff Javier Salazar says the search continues for Wilifredo, who’s believed to be in San Antonio.  Anyone with information on his whereabouts is asked to contact Crime Stoppers at 210-224-STOP or the Bexar County Sheriff’s Office at 210-335-6000.

The brothers are charged with Attempted Capital Murder.