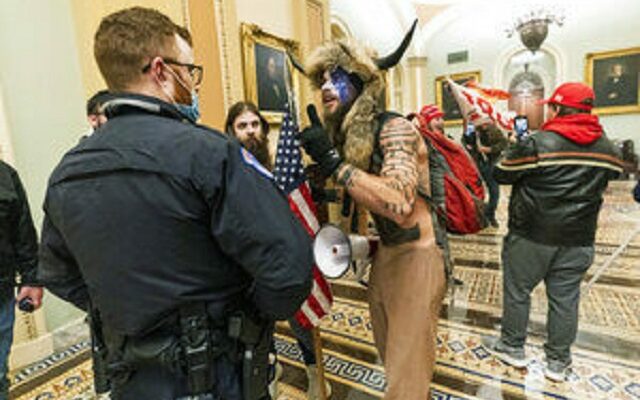 FILE - In this Jan. 6, 2021, file photo supporters of President Donald Trump are confronted by U.S. Capitol Police officers outside the Senate Chamber inside the Capitol in Washington. An Arizona man seen in photos and video of the mob wearing a fur hat with horns was also charged Saturday in Wednesday's chaos. Jacob Anthony Chansley, who also goes by the name Jake Angeli, was taken into custody Saturday, Jan. 9. (AP Photo/Manuel Balce Ceneta, File)

SAN ANTONIO (KTSA News) – He’s the most recognizable protester photographed inside the U.S. Capitol during the riots last week –the shirtless, heavily tattooed man wearing a fur hat with horns, beige pants and face paint.   The man seen carrying a U.S. Flag attached to a spear was first identified as Jake Angeli, but his real name is Jacob Chansley.  He’s also known as the QAnon Shaman.

The QAnon conspiracy theory includes the belief that a cabal of Satan-worshipping pedophiles is running a global child sex-trafficking ring.  QAnon supporters have accused high ranking Democrats, government officials and Hollywood celebrities of being part of the cabal.

Chansley made his first telephonic appearance Monday in a federal courtroom in Phoenix  after being arrested Saturday and charged with entering a restricted building, violent entry, and disorderly conduct.

According to ABC 15 in Phoenix , Chansley’s public defender told  the judge that his client hasn’t been eating since he was arrested because of his diet restrictions.  The food is not organic.  Judge Deborah Fine ordered the public defender to work with the U.S. Marshal’s Office on Chansley’s organic food requirements.

ABC 15 reporter Melissa Blasius talked to Chansley’s mother outside the courtroom and asked about her son’s special diet.

“He gets very sick  if he doesn’t eat organic food–literally will get physically sick,” said Martha  Chansley.

In a previous interview with ABC 15 one day after the riots at the Capitol, Martha Chansley said, “It takes a lot of courage to be a patriot, OK, and to stand up for what it is that you believe.  Not everybody wants to be the person upfront.”

She described her 33-year-old son as a Navy veteran and “one of the gentlest people I know.”  She said he’s trying to get people to hear his message,”Wake up.  Wake up.  Don’t we still live in America?”

The riots Wednesday at the U.S. Capitol left five people dead, including a police officer.